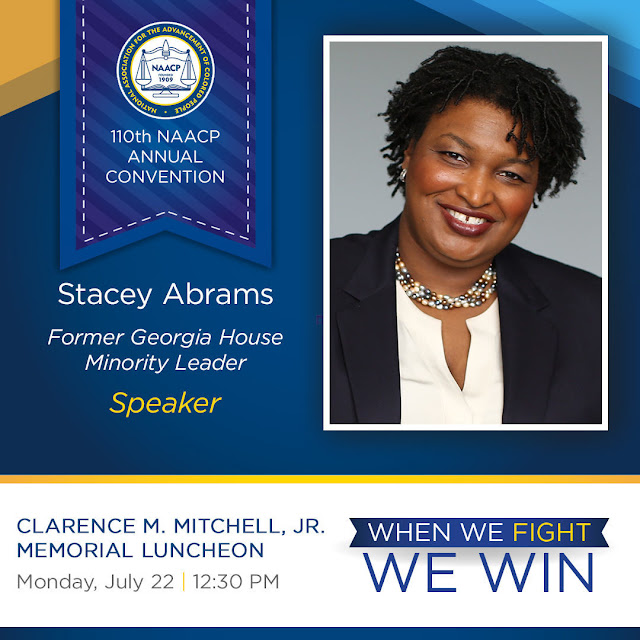 The Honorable Stacey Abrams will speak on the importance of ending voter suppression during the annual NAACP Convention in Detroit
BALTIMORE – The National Association for the Advancement of Colored People
(NAACP), the nation’s foremost civil rights organization, has announced that politician, lawyer and author Stacey Abrams will be speaking at the prestigious Clarence Mitchell Luncheon during the NAACP’s 110th Annual Convention in Detroit, Michigan on July 22.
“Stacey Abrams may have become a household name during the 2018 Georgia gubernatorial race but she has committed her life to fighting for and uplifting the Black community,” said Derrick Johnson, NAACP President and CEO. “Because of her unparalleled compassion, commitment and diligence to improving civic engagement, educational equality, and eliminating race based discrimination, we are so honored and excited to have her speak at the luncheon.”
Stacey Abrams, a native of Gulfport, Mississippi, became the first woman to lead either party in the Georgia General Assembly and the first African American to lead in the House of Representatives. In 2018, Abrams was the Democratic nominee in the Georgia gubernatorial election and became the first black female major-party gubernatorial nominee in United States history. Dedicated to civic engagement, Abrams founded the New Georgia Project, which submitted more than 200,000 registrations from voters of color between 2014 and 2016. She is also the founder and chair of Fair Fight Action, an organization dedicated to advocating for free and fair elections, and securing the voting rights of Georgians. Under the pen name Selena Montgomery, Stacey is also an award-winning author of eight romantic suspense novels, which have sold more than 100,000 copies.
The Clarence Mitchell, Jr. Memorial Luncheon honors the life and legacy of a stalwart of equal justice, Clarence M. Mitchell, Jr., who served as the chief Washington lobbyist for the NAACP for nearly three decades. Mitchell, nicknamed “the 101st U.S. Senator,” played a key role in winning passage of the Civil Rights Act of 1964, the Voting Rights Act of 1965 (including the 1970 and 1975 extensions of the Voting Rights Act), and the Fair Housing Act of 1968, among other notable accomplishments. The luncheon is held in conjunction with a two-day continuing legal education (CLE) program dedicated to training a cadre of attorneys to identify and challenge voter suppression efforts in communities of color during upcoming election cycles. Past speakers for the luncheon have included some of the country’s greatest legal minds, such as Kamala Harris, Eric Holder and Nathaniel Jones. This year’s Clarence Mitchell Luncheon will also include a special honoring of civil rights attorney Damon Keith, who championed for equal and civil rights for nearly a half-century .
ABOUT NAACP 110TH CONVENTION:
The NAACP Convention brings together over 10,000 activists, organizers, and leaders to set policies priorities for the coming year. Highlights will include a Presidential Candidates Forum, a legislative session, a CEO Roundtable, LGBTQ workshop, the awarding of the prestigious Spingarn Medal to Ambassador Patrick Gaspard, and the signature NAACP Experience retail expo and diversity career fair. More information about the 110thAnnual NAACP National Convention, including a detailed schedule of events may be found by visiting naacpconvention.org.
Media interested in covering the event should apply for press credentials here.
###
Founded in 1909, the NAACP is the nation’s oldest and largest nonpartisan civil rights organization. Its members throughout the United States and the world are the premier advocates for civil rights in their communities. You can read more about the NAACP’s work and our six “Game Changer” issue areas here.


Posted by Councilman George L. Cook III at 4:25 AM