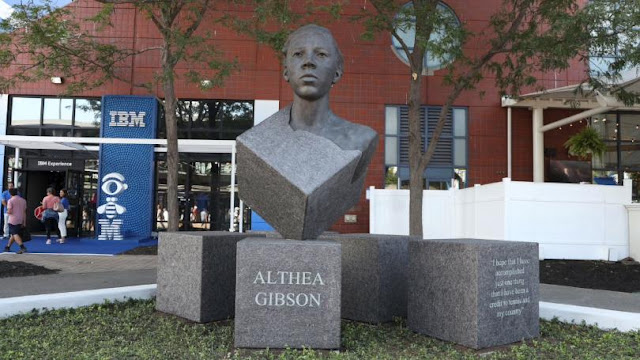 In a long overdue tribute to the first African American to break international tennis' color barrier, a new statue of Althea Gibson was unveiled at the opening day of the U.S. Open.

The statue is comprised of five granite blocks and created by American sculptor Eric Goulder. It sits outside Arthur Ashe Stadium at the Billie Jean King National Tennis Center in Queens, New York.

In 1947, Gibson broke into the elite ranks of the tennis world winning the first 10 consecutive American Tennis Association women's titles. (The ATA was the tennis equivalent of baseball's Negro Leagues.) At the age of 23, Gibson became the first African American player to compete in the U.S. Nationals, the precursor to the U.S. Open, in 1950.

Between 1956 to 1958, Gibson made her mark. She won 11 majors, and was the first black player to win the French Open, Wimbledon and the U.S. Nationals. When she retired in 1958, she was the top-ranked woman in tennis having won more than 50 singles and doubles championships.