Barbie® recognizes all female role models. The Inspiring Women™ Series pays tribute to incredible heroines of their time; courageous women who took risks, changed rules and paved the way for generations of girls to dream bigger than ever before. 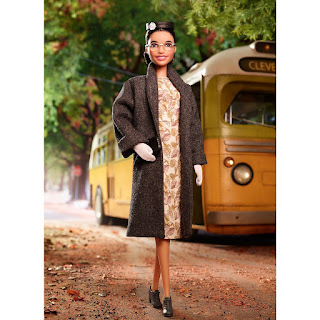 Rosa Louise Parks led an ordinary life as a seamstress until an extraordinary moment on December 1, 1955. When she refused an order to give up her seat to a white passenger and move to the back of the bus, Mrs. Parks’ act of defiance became the catalyst for the Montgomery Bus Boycott. Rosa Parks’ quiet strength played a notable role in the civil rights movement, but it would still take another nine years and more struggles before the 1964 Civil Rights Act overruled existing segregations laws. Hailed as “the Mother of the Modern Civil Rights Movement,” Rosa Parks earned worldwide recognition and numerous awards including the prestigious Presidential Medal of Freedom and Congressional Gold Medal of Honor.