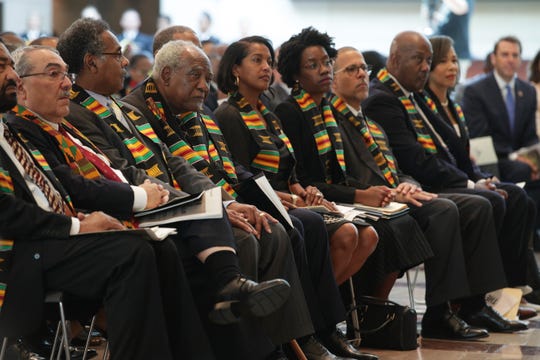 Led by African drummers, a parade of Congressional Black Caucus members, including civil rights legend Rep. John Lewis, marched into Emancipation Hall on Tuesday to mark the 400th anniversary of the first Africans brought to the English colonies.

“All of our history is what makes this country a great country,’’ said Rep. Karen Bass, D-Calif., chairwoman of the Congressional Black Caucus, noting the nation has been reluctant to embrace all of its history, including slavery.

The ceremony was held in Emancipation Hall, an ornate foyer in the Capitol Visitor Center, named after the slaves who helped build the U.S. Capitol. With a statue of abolitionist Frederick Douglass only a few feet away, Republican and Democratic leaders cited the work of civil rights activists like Douglass and the contributions of African Americans to the building of the country.

This summer marked the 400th anniversary of the arrival of a ship from Angola carrying the first Africans to the English colonies. Across the country, lawmakers, civil rights activists, national park service officials and descendants of enslaved Africans have held ceremonies to remember the country's "original sin" and the impact of chattel slavery.

Later this week, the Congressional Black Caucus Foundation, Inc. will host its annual legislative conference, which will also include programs to recognize the year 1619.

As we remember and honor the 400th Anniversary of all of the enslaved Africans arrival in America, we must never forget the tragedies, successes, and contributions of all of them and all of their progeny. #400YearsLater pic.twitter.com/RlCBiYSviH