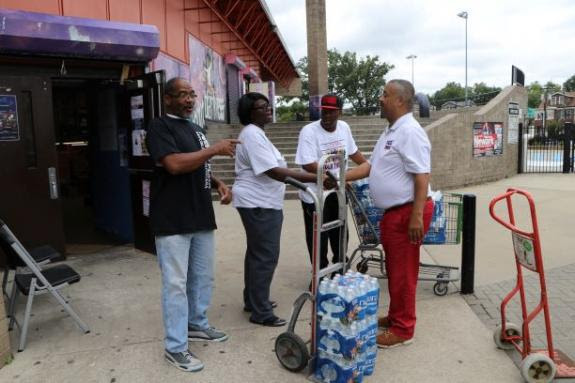 Washington, D.C. — Congressman Donald M. Payne, Jr. handed out bottled water and discussed Newark’s water crisis with residents at two local facilities Sept. 6. The Congressman spent more than two hours at the Bo Porter Sports Complex and the Boylan Street Recreation Center, where he helped residents get the clean water they needed and talked with them about their water concerns. The visits were part of the Congressman’s commitment to do everything possible to help local communities survive the crisis.

Congressman Payne, Jr. said he understands their concerns because he is one of them.

“As a resident and representative of Newark, I am very concerned about the discovery of elevated levels of lead in Newark’s water supply,” said Congressman Payne, Jr. “This is water my family and I drink regularly. Traditionally, Newark has been known for the quality of its water and had been known for some of the cleanest water in the country.”

He said the crisis in Newark is his top priority. He is working with local, state and national officials to solve it as quickly as possible. Congressman Payne, Jr. introduced the Test for Lead Act in Congress to establish stronger tests for lead in school drinking water across the country. Recently, he co-signed and sent letters to the U.S. Environmental Protection Agency and U.S. Department of Agriculture to make sure facilities and communities have enough bottled water to distribute until the city’s drinking water is considered safe.

But he wanted to see the situation and talk with affected residents personally. He said the urgency of the issue is one that requires physical as well as political action to get clean water to communities now and then make sure nothing like this tragedy happens in the future, especially when it comes to the safety of the district’s children.

“The greatest threat with this water issue is the health of our children,” said Congressman Payne, Jr. “We need to work tirelessly and immediately to guarantee what happened in Flint, MI. doesn’t happen anywhere else.”
Posted by Councilman George L. Cook III at 4:40 PM