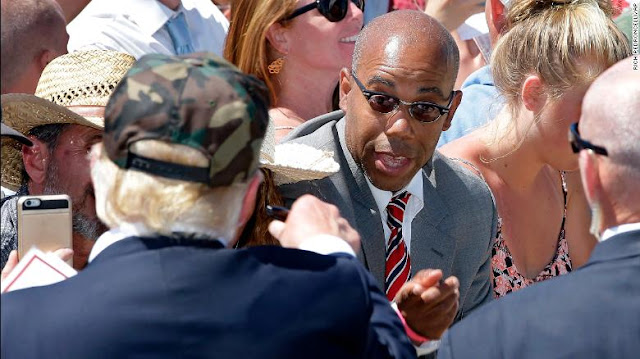 Gregory Cheadle, the black man President Donald Trump once described at a rally as “my African American,” is fed up.

After two years of frustration with the president’s rhetoric on race and the lack of diversity in the administration, Cheadle told PBS NewsHour he has decided to leave the Republican party and run for a seat in the U.S. House of Representative as an independent in 2020.

Now, the 62-year-old real estate broker, who supported the Republican approach to the economy, said he sees the party as pursuing a “pro-white” agenda and using black people like him as “political pawns.” The final straw for Cheadle came when he watched many Republicans defend Trump’s tweets telling four congresswomen of color, who are all American citizens, to go back to their countries, as well as defend the president’s attacks on Rep. Elijah Cummings, D-Md., and his comments that Cummings’ hometown of Baltimore is “infested.”

The White House and Trump have fiercely defended the president’s comments as fair criticism of the lawmakers’ liberal policies. But for Cheadle, the incidents were too much. A few weeks ago, he was scrolling through posts written by fellow Republicans, who are his Facebook friends, and reached a breaking point.

“President Trump is a rich guy who is mired in white privilege to the extreme,” said Cheadle, of Redding, Calif., who switched from being an independent to a Republican in 2001. “Republicans are too sheepish to call him out on anything and they are afraid of losing their positions and losing any power themselves.”

“They were sidestepping the people of color issue and saying that, ‘No, it’s not racist,’” he said. “They were saying these people were socialists and communists. That’s what they were saying. And I thought this is a classic case of whites not seeing racism because they want to put blinders on and make it about something else.”

Cheadle said he understands some will think he waited too long to leave the Republican party, even accepting those assertions as “correct.” He said he had held out hope that the Republican party would move to work on challenges specifically facing African Americans like healthcare disparities or black families having less wealth than white families. But, he no longer expects that.

Cheadle said he is especially unhappy with the racial makeup of the president’s judicial nominations. Trump often gets loud applause at campaign rallies for touting how many judges his administration has been able to get confirmed by the Senate. But an Associated Press analysis has found that 91 percent of Trump’s nominees are white, and 81 percent are male.

Cheadle said he wouldn’t use the term “racist” to describe the president but believes he has a “white superiority complex.”

When asked what he would say to critics who think he is leaving the Republican party for publicity, Cheadle said he understands the potential criticism, but that he believes running as an independent is even harder than as a Democrat or Republican because of the lack of party structure. In the end, his decision came down to being disgusted with the president’s words.

“We just haven’t had people called the names publicly that we have had with this administration,” he said. “To stay on this ship now, as a black Republican, I couldn’t do it.”