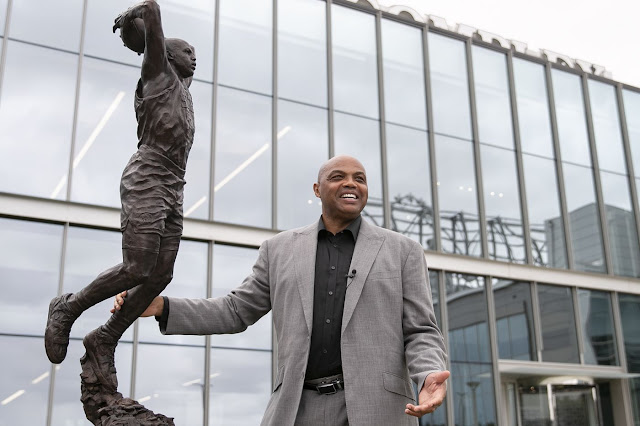 76ers alumni flooded the Complex Friday to witness Charles Barkley taking his place as the eighth Sixer to be immortalized with a statue on Legends Walk.

“When you grow up in Leeds, Alabama, in the projects, and all these 56 years later, you’re standing in Philadelphia, Pennsylvania and you’ve had this amazing journey, all you can really say is thank you,” Barkley said.

During his remarks, Barkley recalled the adversity he faced en route to his illustrious career.

“People always said, ‘He’s undersized,’” Barkley said. “To all the small power forwards and short guards out there -- you can still get your thing done.”

That very spirit seems to have rubbed off on another player who was coming up through the ranks during Barkley’s prime.

“[Barkley] showed me -- It’s not the height, it’s the size of your heart, your will, and your passion to go get it and to compete at the highest level,” Brand said, calling Barkley “someone I looked up to and emulated in my game every day.”

Aside from inspiring young players nationwide, Barkley also managed to become an 11-time All Star, an 11-time All-NBA selection, the 1992-93 MVP, and two-time Olympic gold medalist before getting enshrined in the Naismith Memorial Basketball Hall of Fame in 2006.

Today, when Barkley’s not busy voicing NBA broadcasts on TNT, he spends his summers back in the city which drafted him in 1984.

“He was a massive presence on the court,” Heck said. “What you don’t see is what Charles contributed off the court. He is still very much part of the community in a way that is iconic.”

The sculpture, commissioned by sculptor Chad Fisher, now becomes a permanent fixture in the lives of today’s Sixers.

Brown said he nods the club’s rich history every day when entering the facility, hoping his players do the same.

Considering the statues on Legends Walk and the banners hanging above the court, Brown said, “[It’s] truly breathtaking.”