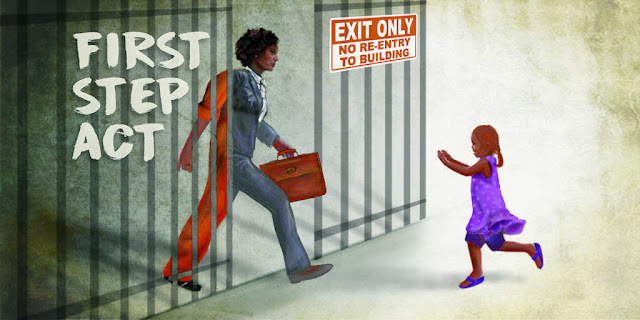 Pres. Trump likes to brag about the First Step Act as something he has done to help black people (as if we're the only people incarcerated), but if he cares so much why hasn't the program been properly funded? No funding was allocated to support the law in 2019 and only $14 million of the $75 million annual appropriation to run the program has been allocated fore the 2020 year.

Per The Crime Report:

The groups sent a letter this week to leaders of the Senate Appropriations Committee, which next week will consider the Department of Justice (DOJ) budget for the federal fiscal year that begins on October 1.

Reformers want DOJ’s Bureau of Prisons to get the full $75 million annual appropriation that was authorized in the law.

In its initial budget request to Congress, DOJ sought far less money for the First Step Act and so far has not formally asked congressional appropriators to raise the total, says Inimai Chettiar of the Justice Action Network, one of the groups that is pressuring for a higher allocation.

The other organizations joining in the request are the American Civil Liberties Union, the American Conservative Union, Americans for Prosperity, the Drug Policy Alliance, the Due Process Institute, the Faith and Freedom Coalition, Families Against Mandatory Minimums (FAMM), FreedomWorks, Law Enforcement Leaders to Reduce Crime and Incarceration, The Leadership Conference on Civil and Human Rights, Prison Fellowship, the R Street Institute, and The Sentencing Project.

“We cannot leave it to the Department of Justice to reallocate existing funds to implement these reforms — spreading thin the already limited resources within the Bureau of Prisons,” the groups told Sens. Jerry Moran (R-KS) and Jeanne Shaheen (D-NH), the chairman and ranking member of the subcommittee overseeing DOJ spending.

“The success of these programs will lead to cost-savings in the long run, but in order to achieve these goals we cannot afford to underfund this important initiative.”

If Trump wanted it funded he would give the DOJ its marching orders to do so. It's apparent to me that Trump wants a nice talking point but not an actually fully funded program to actually create real federal prison reforms.

Then again, why should we have believed otherwise?