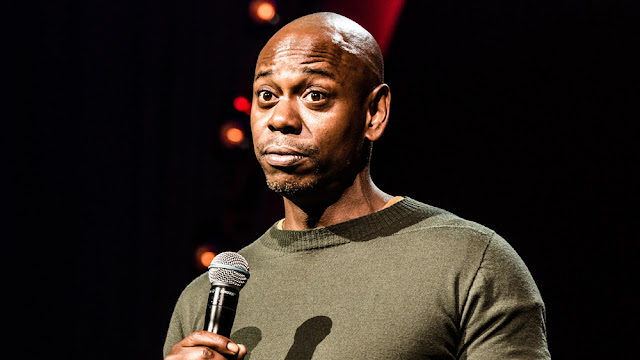 An outstanding lineup of entertainers gathered in the Kennedy Center Concert Hall to salute Dave Chappelle, recipient of the 22nd annual Mark Twain Prize for American Humor on October 27, 2019. The Prize, which is named to honor one of the world’s greatest humorists, was given at a gala performance featuring some of the biggest names in comedy. The program will be broadcast on PBS stations on Tuesday, January 7, 2020.

The Mark Twain Prize for American Humor recognizes individuals who have had an impact on American society in ways similar to the distinguished 19th-century novelist and essayist Samuel Clemens, best known as Mark Twain. As a social commentator, satirist, and creator of characters, Clemens was a fearless observer of society, who startled many while delighting and informing many more with his uncompromising perspective on social injustice and personal folly.

Kennedy Center President Deborah F. Rutter reflected, “Dave is the embodiment of Mark Twain’s observation that ‘against the assault of humor, nothing can stand.’ For three decades, Dave has challenged us to see hot-button issues from his entirely original yet relatable perspective. Dave’s a great guy and a hometown hero here in Washington, D.C., where he grew up. We’re so looking forward to welcoming him back home.”

Dave Chappelle is an internationally recognized stand-up comedian and actor whose trademark wit and sharp, irreverent social commentary explores race, popular culture, sex, drugs, politics, and fame. Arguably the most-touring comic on the circuit, Chappelle has performed more than 1,600 concerts worldwide in the past four years, selling out shows within minutes of their announcements.

Dave Chappelle could always make people laugh. Once he realized the power of his natural talent, he set some ambitious goals for his art. As a 14-year-old student at Washington, D.C.'s Duke Ellington School of the Arts, Chappelle crafted his stand-up comedy act out of the realities of his life growing up Black in the nation's capital.

Chappelle was the mastermind behind the 2003 sketch comedy hit, The Chappelle Show — one of the highest rated programs on Comedy Central. The show earned three Emmy® nominations and went on to become the best-selling TV show in DVD history. Feature film credits include Bradley Cooper's award-winning remake of A Star is Born, Spike Lee's Chi-Raq, Undercover Brother, Screwed, Blue Streak, 200 Cigarettes, You've Got Mail, Woo, Half Baked, The Real Blonde, Con Air, Joe's Apartment, The Nutty Professor, Getting In, Undercover Blues, and Robin Hood: Men in Tights. In 2000, Chappelle recorded his first hour-long special in Washington, D.C. for HBO, Dave Chappelle: Killin' Them Softly. Chappelle's second comedy special, Dave Chappelle: For What It's Worth, was filmed in San Francisco's Fillmore Auditorium and aired on Showtime in 2004.

The past few years have been banner for Chappelle. In 2017, he received his first Emmy Award® for his debut episode on Saturday Night Live. His memorable, panoramic monologue was the comic relief the country needed following the 2016 Presidential election that reflected our nation's deep racial divide. Chappelle celebrated his 30th year in comedy by releasing not one, but four highly anticipated stand-up specials on Netflix. The first two specials, The Age of Spin and Deep in the Heart of Texas, were released in March 2017. That summer, Chappelle took up residency at New York's Radio City Music Hall, selling more than 90,000 tickets and performing 16 shows that included 58 guests representing the biggest names in comedy and music. He capped off the year by releasing the remaining two specials, Equanimity and The Bird Revelations on New Year's Eve. All four specials were delivered on vinyl as double-feature albums and received Grammy Awards® for Best Comedy Album in 2018 and 2019. Pollstar awarded Chappelle with Comedy Tour of The Year in 2014 and 2018 and he captured his second Emmy® for Outstanding Variety Special with Equanimity in 2018.

The Mark Twain Prize recognizes people who have had an impact on American society in ways similar to the distinguished 19th century novelist and essayist best known as Mark Twain. As a social commentator, satirist and creator of memorable characters, Samuel Clemens was a fearless observer of society, who startled and outraged many while delighting and informing many more with his uncompromising perspective of social injustice and personal folly. He revealed the great truth of humor when he said "against the assault of laughter nothing can stand."