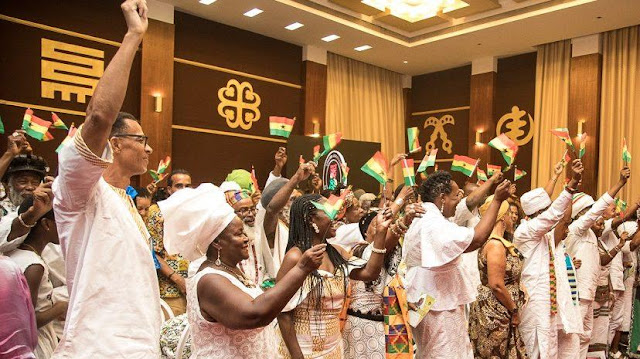 The oath of allegiance was administered by a judge in a ceremony at Jubilee House, the seat of government. The ceremony is the biggest highlight as Ghana marks 2019 as the Year of Return. One after the other, the new citizens took turns to shake hands with their president and went on to collect their citizenship certificates.

“On behalf of the government and people of Ghana, I congratulate you once again on resuming your identity as Ghanaians,” President Nana Akufo-Addo said in a speech on Wednesday, Nov. 27.

As Quartz Africa has previously reported, throughout 2019, Ghana has been hosting a raft of activities, at home and abroad, to encourage the descendants of those who were forcibly sent away to return. In June, the president embarked on a five-nation tour of the Caribbean to promote the initiative.

“We recognize our unique position as the location for 75% of the slave dungeons built on the west coast of Africa through which the slaves were transported. That is why we had a responsibility to extend the hand of welcome, back home to Africans in the diaspora,” the president added in his speech.

“The most valuable possession that was taken away from us was our identity and our connection; it was like severing the umbilical cord… But tonight, our identity, the dignity, the pride that has been absent is restored here,” Rabbi Kohain, who spoke on behalf of the new citizens said.

Aside from sentimental reasons, the return of the African diaspora is economically pragmatic for Ghana. Earlier this year, the government waived visa requirements for some countries and slashed the cost of a visa on arrival in half in hopes that heritage tourism will bring in much-needed revenue.

About 500,000 tourists are expected to visit Ghana during the Year of Return; up from the 380,000 that visited in 2018. Businesses are eagerly anticipating an influx of visitors over the festive season with the Afro Nation and Afrochella festivals expected to attract thousands of young diasporan Africans. In the US this year, Ghana has been heralded as a major end-of-year vacation destination among some African American celebrities, black college alumni organizations and similar groups.