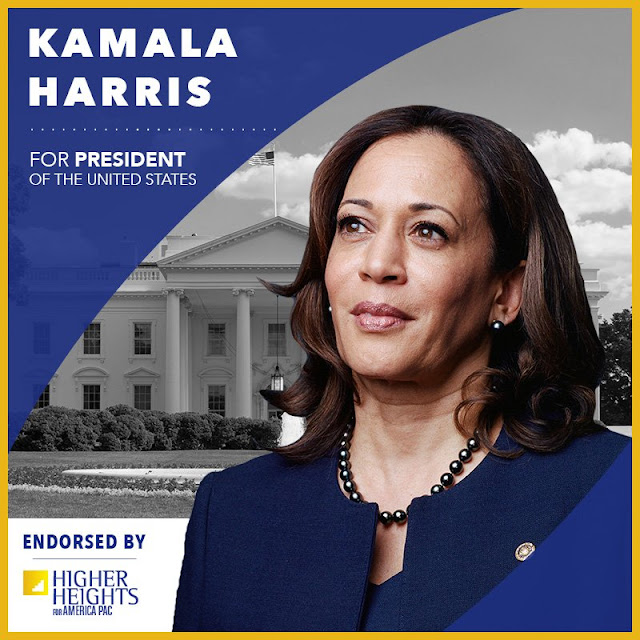 Higher Heights For America PAC, a political action committee exclusively dedicated to electing more progressive Black women at the federal and statewide levels and that seeks to elevate Black women’s voices to shape and advance progressive policies and politics has endorsed Kamala Harris for President of the United States. Read their endorsement below.

History shows that when Black women gain political power we champion policies that benefit multiple communities. Higher Heights for America is thrilled to endorse Senator Kamala D. Harris, CA, for president of the United States. Kamala has spent her life fighting injustice. As president, she will fight to restore truth and justice in America and build an economy that works for everyone.

“I am incredibly proud to earn Higher Heights’ endorsement in this campaign,” said Harris. “Their leadership ensures that our power extends from the voting booth to elected office. Black women are keenly aware that justice is on the ballot in this election to tackle issues like maternal health, teacher pay and closing the gender pay and racial wealth gap. Black women are more than the backbone of the Democratic party and apparatus- they are the power brokers.”

Since taking office, she has introduced and cosponsored legislation to raise wages for working people, reform our broken criminal justice system, make healthcare a right for all Americans, address the epidemic of substance abuse, support veterans and military families, and expand access to childcare for working parents.

Kamala has championed the rights of sexual assault survivors and led the charge against Brett Kavanaugh’s nomination to the Supreme Court. As president, she will nominate judges who know Roe v. Wade is the law of the land, protect Planned Parenthood from Republican attempts to defund essential health services, and address racial disparities in maternal health care.

Born in Oakland, California, Kamala Harris is a graduate of Howard University, and she earned her law degree from the University of California, Hastings College of the Law.

Growing up, Kamala had a stroller’s eye view of the Civil Rights Movement. Through the examples of courageous leaders such as Thurgood Marshall, Constance Baker Motley, and Charles Hamilton Houston, she learned the kind of character required to stand up to the powerful, and she resolved to spend her life advocating for those who could not defend themselves.

Addressing the country’s long, tortured history of lynching is an issue that Senator Harris has taken on. Since 1918 Congress had tried but failed roughly 200 times to pass anti-lynching legislation. On February 14, 2019, Senator Harris introduced The Justice for Victims of Lynching Act, which would criminalize lynching for the first time in American history. She was joined by her colleagues Senator Cory Booker of New Jersey and Senator Tim Scott of South Carolina in sponsoring the bill. The motion was passed, marking a historic step towards the first federal anti-lynching law in the United States.

Kamala led the team that helped bring down California’s Proposition 8 at the U.S. Supreme Court and to fight for marriage equality nationwide.

If elected, Kamala plans to fight for working families by increasing wages, decreasing the cost of living and combating sexism, racism, and corporate favoritism in our economy, which would ensure every American receives equal treatment and a decent quality of life.

Posted by Councilman George L. Cook III at 7:39 AM