New Book Presents Ida B. Wells as a Model for Today’s Justice Seekers 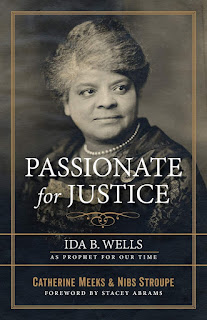 Born enslaved, Ida B. Wells was a powerful reformer and witness for justice from 1878 until her death in 1931. An investigative journalist and newspaper publisher, Wells led an anti-lynching campaign, worked for women’s suffrage, and founded organizations to improve the lives of African Americans. Wells is being rediscovered; this year the city of Chicago, where Wells lived and worked for more than three decades, renamed a major downtown thoroughfare “Ida B. Wells Drive.” Now, in their new book Passionate for Justice: Ida B. Wells as Prophet for Our Time (Church Publishing, $18.95 paper, September 17, 2019), African-American scholar/activist Catherine Meeks, and Anglo pastor Nibs Stroupe reclaim Wells as a guide for those seeking to respond to the current state of affairs in the U.S.

“Fearless, ferocious, formidable, and feminist,” Wells, who was “intersectional before it became cool,” dedicated her life to the idea of equity and justice for all. “She worked for the betterment of a country that saw her as a black woman and second class citizen,” the authors write. With her tenacity and courage, she modeled the fierceness and dedication required to be a voice for justice. “Wells did the work no one else would do. She kept showing up where she wasn’t wanted.”

“Her dogged adherence to the mission of anti-lynching work and fighting for women’s suffrage along with overall liberation for black people serves as an amazing model for us in the twenty-first century,” Meeks writes. “We have allowed ourselves to be kidnapped by the illusion of liberation because a few laws got overturned and we gained access to a bit of delegated white power. That illusion has caused us to allow ourselves to be less compassionate than we need to be toward others in our own communities.”

Wells defined herself not as a former slave, but as a daughter of God. This affirmation of her equal humanity made her a vocal and fierce opponent of a system that classified African Americans as less than human. “Her work against lynching angered the white population the most because she refused to allow the white narrative that blamed lynching on the behavior of black people, especially the men, to stand as the truth,” the authors write.

Meeks and Stroupe bring a unique joint perspective to this work: both grew up in segregated Arkansas. They walked a parallel path, they write, kindred souls “poised toward the search for liberation from our earliest days and while we had no way to name that quest, there was an inexplicable spirit of grace that moved us along that path.”

The book features an introduction by Wells’s great-granddaughter, Michelle Duster, who writes: “As our country experiences efforts to divide and oppress people…the life and legacy of Ida B. Wells can be a guide and inspiration for those who are committed to equality and justice.” The foreword is by Stacey Abrams, the first black female from a major party to run for governor in the history of the United States: “In Passionate for Justice, we find a compass that points us to the future, where we can each give voice and action to justice, equity, and life-giving community. Ida Wells would have had it no other way.”