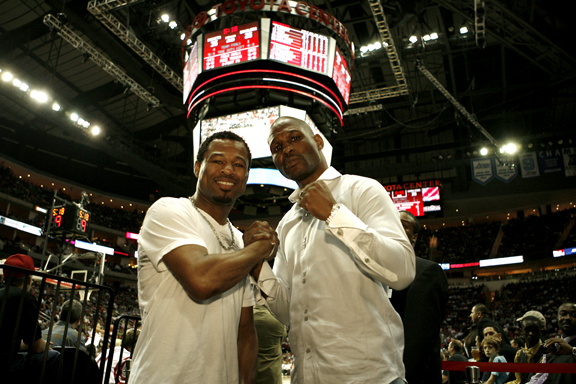 The International Boxing Hall of Fame and Museum has announced the members of the Class of 2020. Inductees include boxing greats Bernard Hopkins and “Sugar” Shane Mosley.

Upon hearing of his induction Hopkins said, "I'm glad I'm entering the house of greatness past and present. Thanks to boxing, I became a greater inspiration to the world."

Hopkins is one of the most successful boxers of the past three decades, having held multiple world championships in two weight classes, including the undisputed middleweight title from 2004 to 2005, and the lineal light heavyweight title from 2011 to 2012.

Hopkins defeated Jean Pascal for the WBC and lineal light heavyweight titles. This victory made Hopkins the oldest boxer in history to win a world championship at the age of 46, breaking George Foreman's record set in 1994. Hopkins later broke his own record by winning the IBF light heavyweight title from Tavoris Cloud in 2013, and again in 2014 when he won the WBA (Super) title from Beibut Shumenov, at ages 48 and 49, respectively.

Hopkins retired in 2016 after losing a fight to Joe Snityh Jr.

"I just wanted to be a fighter and fit into the world of boxing, and this is a dream come true. I'm always excited to come back to Canastota but to come back this year will be very special." said Mosley after hearing about his induction into the Hall of fame.

On August 16, 2017 Mosley announced his retirement after being a professional for 24 years. Speaking to ESPN, he said his body was no longer in a state where he could get through training.

In a statement, he said, What happened was my arm is breaking down, my knees, shoulders. My back is starting to break down. My body is telling me I’m older and I can’t do it at 100 percent. I can’t see myself fighting again. I’d have to say I’m retired.

He retired with 61 fights in the paid ranks. He won 49, with 41 coming inside the distance, 10 losses, having only been stopped once, 1 draw and a no contest.

The 2020 Hall of Fame Induction Weekend will be held June 11-14th in Canastota, NY. Many events in “Boxing’s Hometown” of Canastota throughout the four-day celebration, including a 5K Race / Fun Run, golf tournament, boxing autograph card show, VIP Cocktail Reception, Parade of Champions and the Official Induction Ceremony on the Hall of Fame Museum Grounds, are scheduled. The Hall of Fame Weekend evening events include Friday night’s Fight Night at Turning Stone and Saturday’s Banquet of Champions. Both events will take place at Turning Stone Resort Casino in nearby Verona, NY.