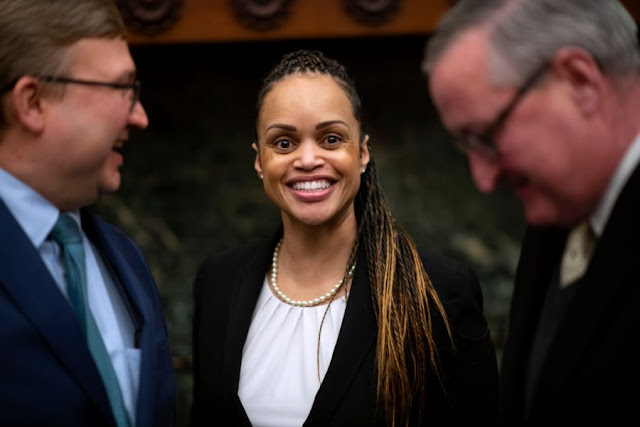 Following an extensive four-month search, Mayor Jim Kenney today appointed Danielle Outlaw, Chief of Police in Portland, Oregon, to serve as the next Commissioner of the Philadelphia Police Department.

Outlaw is a native of Oakland, CA., and served for nearly 20 years in the Oakland Police Department, rising through the ranks to become Deputy Chief of Police. Outlaw was the second female Deputy Chief in the history of the Oakland Police Department and the first this century. Her other assignments in Oakland included Patrol, Criminal Investigation, and Internal Affairs. While in Oakland, Outlaw won the 2015 Gary Hayes Award — a national award given to those who have demonstrated leadership and innovation in the police profession.

Outlaw was appointed Chief of Police in Portland, Oregon in October 2017 — becoming the first African American woman to hold the position. In Portland, Outlaw implemented crime strategies tailored to the needs and challenges of individual precincts, which resulted in decreased crime rates. Under her leadership, the Portland force made its greatest strides in achieving use of force reforms under a federal consent decree instituted prior to her tenure. This included new policies to address excessive force against those suffering from mental health issues. Under Outlaw’s watch, the Portland Police Bureau received national and international recognition for work in community trust-building, crowd management response, and constitutional policing.

“I think constantly about what it takes to be a police officer. Our men and women in blue leave home each day knowing they are about to put their lives at risk to protect our community, and that even on a good day they are likely to encounter extremely challenging and disturbing situations. I know officers take on this sworn duty, first and foremost, to help Philadelphians. Their devotion to public service is never forgotten.

“But make no mistake: while I have tremendous respect for our officers, the Philadelphia Police Department needs reform. I am appointing Danielle Outlaw because I am convinced she has the conviction, courage, and compassion needed to bring long-overdue reform to the Department. After meeting and speaking with her at length, I came away confident that Danielle Outlaw possesses the strength, integrity, and empathy vital to the tasks ahead.

“With our support, she will tackle a host of difficult issues, from racism and gender discrimination, to horrid instances of sexual assault on fellow officers. These are issues that too often negatively impact women — especially women of color — within the Department. Commissioner Outlaw will implement reforms with urgency, so that racial, ethnic, and gender discrimination are not tolerated.

“At the same time, she will work relentlessly to combat crime, particularly homicides and other violent crime. This will include a focus on our multi-departmental effort to stem the tide of gun violence that plagues our city. Commissioner Outlaw’s commitment to restoring the community’s trust in our police will be equally strong. She understands the history of race relations in Philadelphia, particularly the distrust that many residents justifiably harbor in the wake of decades of injustice. She will be devoted to listening and encouraging constructive exchanges of ideas and concerns from all Philadelphians. Danielle Outlaw will tackle divisiveness with dialogue.

“These have been trying times, with fear and anger fueled by decades of injustice and, more recently, abhorrent rhetoric at the national level. I know Philadelphians can rise above it. Whether you are a longtime resident worried about crime on your block, an African American man who fears being unlawfully stopped for a broken taillight, or a patrol officer who feels unappreciated by those you serve, I ask for your help. Put aside your preconceptions and your anger — and support our new Commissioner as she leads the Department through the tremendous challenges ahead. As we approach the new decade, I am optimistic these reforms will usher in a new and better era for our city.”

“I am honored by the faith that Mayor Kenney is placing in me to lead the Philadelphia Police Department. While I am new to Philadelphia, I am not new to the challenges of big-city, 21st century policing. I encountered and dealt with the issues of employee health and wellness, equity, contemporary training, crime, fair and just prosecution, community trust, homelessness, substance abuse, police accountability, and innovation and technology — just to name a few — as I worked various assignments and rose through the ranks in Oakland, California. And I directly addressed these issues while leading the police force in Portland, Oregon.

“Modern policing is data-driven, but the paramount factor is not so easily quantified: trust — the trust residents have that their police force will keep them safe and treat them with respect. I am convinced that trust can be restored, here and across the nation. I am convinced community-police relations can be rebuilt and fortified through dialogue, transparency, and accountability.

“It will be a privilege to serve as Philadelphia Police Commissioner and to serve all who live and work in this great city. I will work relentlessly to reduce crime in Philadelphia — particularly the insidious gun violence that plagues too many communities. And I will do so in a way that ensures all people are treated equitably regardless of their gender identity, race, ethnicity, or sexual orientation. I am convinced there can be humanity in authority; they are not mutually exclusive. That was true in Oakland and in Portland, and I know it is true here in Philadelphia.”

Danielle Outlaw earned a Bachelor of Arts in Sociology from the University of San Francisco and a Master of Business Administration from Pepperdine University. She has frequently spoken nationally on issues related to policing, justice, and community relations. She is a graduate of the Police Executive Research Forum Senior Management Institute of Police, the Major Cities Chiefs’ Association Police Executive Leadership Institute, and the FBI National Executive Institute. She is a member of the International Association of Chiefs of Police Human and Civil Rights Committee, and is also an active member of the National Organization of Black Law Executives.

“I would like to publicly thank Interim Commissioner Christine Coulter for her unwavering leadership over the past four months,” said Mayor Kenney. “She stepped in during a difficult time and lead the force with grace, professionalism, and expertise. I appreciate that she is committed to a smooth transition.”

The appointment comes after a nearly four-month search in which more than 30 candidates were considered, including 18 from within the Department. A diverse team of City officials from the Mayor’s Office, Managing Director’s Office, Office of Criminal Justice, Law Department, and the Police Advisory Commission interviewed each of the candidates over the course of multiple rounds. The City also received assistance during this process from the Police Executive Research Forum (PERF), a police research and policy organization that also provides management services and technical assistance to law enforcement agencies. PERF supported the City by providing outreach, identifying qualified candidates, and assisting in the interview process.

In addition, the Mayor sought input from residents through a survey that was made available both online and in-person at City Hall. Residents provided feedback on what they thought were the most important issues for the next police commissioner to address, as well as the characteristics of the next police commissioner. The City heard from roughly 4,000 individuals, and their input helped to inform the questions that were asked of candidates.