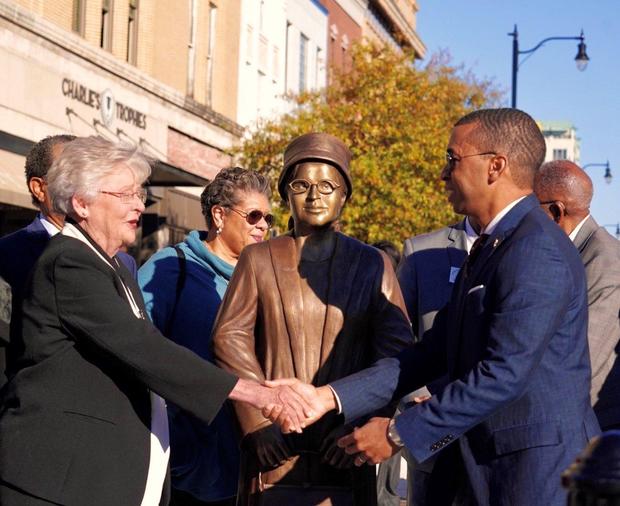 A new statue of civil rights pioneer Rosa Parks was unveiled in downtown Montgomery on December 1, 2019.

“This depiction will inspire future generations to make the pilgrimage to our city, to push toward the path of righteousness, strength, courage and equality,” said Montgomery Mayor Steven Reed, who took office as the first African-American mayor of the city last month.

Gov. Kay Ivey and Reed took part in pulling down a shroud to unveil the statue at Montgomery Plaza at the Court Street Fountain, 30 feet from the spot where Parks is believed to have boarded the segregated bus where she refused to give up her seat to a white man on Dec. 1, 1955.

“We are here to be reminded of the struggle so future generations can do better, and be better,” Ivey said. “No one has ever stood so tall as did Rosa Parks when she sat down.”

The statue of Parks depicts her standing, with her hands clutching her purse in front of her.

Granite markers at the site will honor four women who were plaintiffs in Browder vs. Gayle, the court case that led to a ruling that segregation on Montgomery’s public buses was unconstitutional.

The civil rights memorials are a partnership between the City of Montgomery, Montgomery County, the Alabama Department of Tourism and the Montgomery Area Business Committee for the Arts.

Montgomery County artist Clydetta Fulmer was commissioned to complete the work in conjunction with city and state bicentennial commemorations.