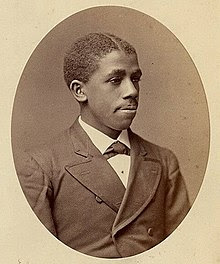 Edward Alexander Bouchet was an African American physicist and educator and was the first African-American to earn a Ph.D. from any American university, completing his dissertation in physics at Yale in 1876. On the basis of his academic record he was elected to the Phi Beta Kappa Society.

Although Bouchet was elected to Phi Beta Kappa along with other members of the Yale class of 1874, the official induction did not take place until 1884, when the Yale chapter was reorganized after thirteen years of inactivity. Because of the circumstances, Bouchet was not the first African American elected to Phi Beta Kappa as many historical accounts state; that honor belongs to George Washington Henderson (University of Vermont). Bouchet was also among the first 20 Americans (of any race) to receive a Ph.D. in physics and was the sixth to earn a Ph.D. in physics from Yale.