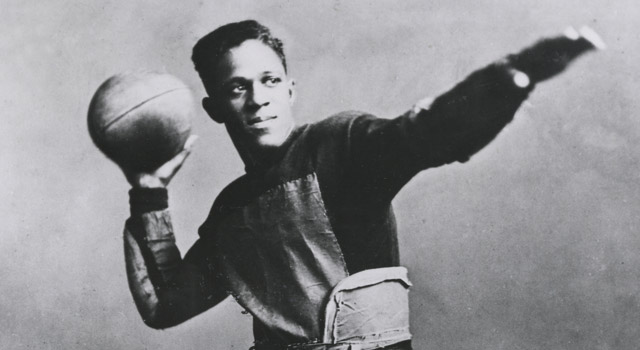 Fritz Pollard, an All-America halfback from Brown University was a pro football pioneer in more ways than one. The 5-9, 165-pound back, who led Brown to the Rose Bowl in 1915, turned pro in 1919, when he joined the Akron (OH) Pros following army service during World War I. In 1920, the Pros joined the newly founded American Professional Football Association, later renamed the National Football League. That season, with Pollard leading the charge, the Pros went undefeated (8-0-3) to win the league's first crown.

As a member of the new league, Pollard immediately earned a place in pro football history as one of just two African Americans in the new league. In 1921 he earned another distinction becoming the first African American head coach in NFL history when the Pros named him co-coach of the team.

Contemporary accounts indicate that Pollard, an exciting elusive runner, was the most feared running back in the fledgling league. During his pro football career the two-time All-America played and sometimes coached for four different NFL teams, the Pros/Indians (1920-21/1925-26), the Milwaukee Badgers (1922), the Hammond Pros (1923, 1925), and the Providence Steam Roller (1925). Fritz also spent time in 1923 and 1924 playing for the Gilberton Cadamounts, a strong independent pro team in the Pennsylvania “Coal League.”

In 1928, Pollard organized and coached the Chicago Black Hawks, an all-African American professional team based in the Windy City. Pollard's Black Hawks played against white teams around Chicago, but enjoyed their greatest success by scheduling exhibition games against West Coast teams during the winter months. From 1929 until 1932 when the Depression caused the team to fold, the Black Hawks had become one of the more popular teams on the West Coast.