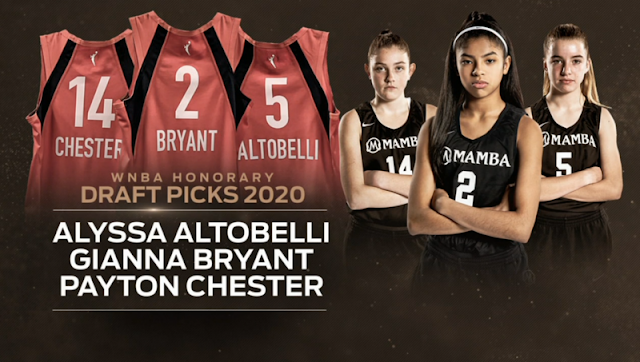 Gianna Bryant, Alyssa Altobelli and Payton Chester, who were among nine killed in a January helicopter crash that also claimed the life of Kobe Bryant, were named honorary selections in Friday's WNBA draft.

"It would have been a dream come true for her," Gianna's mother, Vanessa, said. "Kobe and Gigi loved the WNBA. Thank you. I want to congratulate all of this year's draft picks. Congratulations. Work hard. Never settle. Use that Mamba Mentality."

Before the start of the draft, Engelbert honored Gianna Bryant, Altobelli and Chester by announcing each of the players as jerseys were shown on the screen with their last names on them. The three girls, all 13 years old at the time, were passengers on the helicopter as it traveled to a basketball game at Kobe Bryant's Mamba Sports Academy in California on Jan. 26.

The WNBA had said it planned to honor the memory of the three young teammates during the draft, which was held virtually in response to the coronavirus pandemic.

Gianna, known as Gigi, made no secret of her desire to one day follow her father's footsteps in professional basketball and play in the WNBA. Kobe and Gianna were frequently spotted at WNBA, NBA and college games.