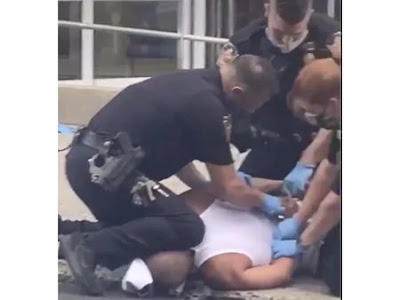 Yet again, we have witnessed the use of excessive force, specifically the chokehold, by a police officer in our country. Over the weekend, an officer from the Allentown (PA) Police Department was caught on camera placing his knee on the neck of a man, in an attempt to arrest him after the officers noticed the man was vomiting and staggering along the street. In this instance the unarmed man was in need of medical attention but instead was met with force by the police officers. The disturbing video also revealed that the man was distressed and terrified for his life.
Barely seven weeks since the death of George Floyd that sparked a national movement against police brutality, we are seeing police officers deploying the same tactics for an arrest that could have been avoided. The officers opted to use excessive force against a member of the community instead of serving. While this time a life was not lost, a life has indeed been changed forever.
While Allentown’s policy forbids the restraining of a person’s neck unless the officer feels their life is at risk, it is evident that without a national federal ban, there will be minimal adherence. A ban with no repercussions serves no purpose.
Three weeks ago the George Floyd Justice in Policing Act championed by the Congressional Black Caucus was the first ever comprehensive legislation to reform law enforcement. This bill is a direct response to the moral moment of the time as Americans from coast to coast are demanding for real change that includes prevention, training, a registry of misconduct to eliminate repeat offenders, use of force standards, ending qualified immunity, and making it easier for the Department of Justice to prosecute civil rights violations. If the George Floyd Justice in Policing Act was law, the officers in Allentown involved would be listed in the misconduct registry which will provide insight to violations and in turn transparency to other precincts about officers who desire to transfer to their district.
As our nation waits for Senate Leader Mitch McConnell to make the George Floyd Justice in Policing Act a priority for a Senate vote, Americans across the country continue to experience incidents of police brutality. How many more lives must we lose? We are at a reckoning point where our country must address the serious and deadly problem of  racial profiling and excessive policing of communities of color. Police officers must be held accountable. We cannot build an equitable and just country without reimagining policing in our communities.
The Congressional Black Caucus is calling for a full independent investigation into this incident in Allentown, PA including the officers involved being punished to the fullest extent of the law for the use of the banned chokehold.