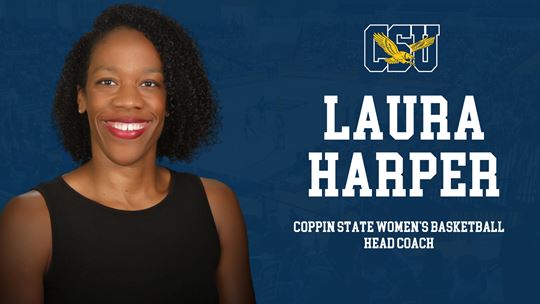 Former WNBA player, Laura Harper, has been named as the new Coppin State University women's basketball head coach, it was announced by Director of Athletics Derek Carter on Monday morning.

"It is a dream come true to be named the new head women's basketball coach at Coppin State University," said Harper. "I am very thankful for the special opportunity that President Jenkins, Mr. Carter, Mrs. Person and Mrs. Carrington-Johnson have granted me. Having a platform as a woman of color, while coaching at an HBCU during this racially sensitive time in our country, inspires me, and I am beyond ready to help lead this group of committed, young women into a new era of Eagles basketball."

Since the conclusion of her playing career, Harper worked as an assistant coach at four NCAA Division I institutions as well as a season as head coach at a top collegiate preparatory school.

"We are excited for Laura Harper to be joining the Coppin State family and look forward to her leadership during the next exciting phase of Eagles women's basketball," said Carter. "Laura will bring incredible passion, energy, and a championship mentality to our team. Throughout her career, she has worked hard to establish herself as a winner in all phases of basketball. I feel that she will provide a valuable influence in the lives of the young women in our program."

Harper most recently served as the head coach at Montverde Academy, one of the premier high school programs in the State of Florida. Harper guided the Eagles to an 18-6 mark this past season and helped all five of her seniors earn NCAA Division I scholarships.

Prior to her time at Montverde, Harper assisted the women's basketball team at the University of Florida for two seasons. Under Harpers' tutelage, Paulina Hersler, who is now playing professionally in Sweden, and 1,200-point scorer Haley Lorenzen, had career years as seniors.

Before moving to the Sunshine State, Harper spent the 2016-17 season at George Washington University under Women's Basketball Hall of Famer Jennifer Rizzotti. That season, the Colonials won an Atlantic 10 Regular Season Championship and advanced to the WNIT, while Harper helped post players Lexi Martins and Caira Washington receive All-Conference honors.

For two years, Harper also worked as an assistant coach at High Point University. In her first season, senior Stacia Robertson was named the Big South Player of the Year and an Associated Press Honorable Mention All-American before going on to play overseas. The Panthers won 20 games during the 2014-15 season and advanced to the Conference Championship Game.

Harper got her start in coaching as an assistant at Loyola University Maryland during the 2013-14 campaign where she was responsible for post player development, scouting, and served as an academic liaison for the Greyhounds.

A four-year standout at the University of Maryland, Harper was named the 2006 NCAA Final Four Most Outstanding Player after leading the Terrapins to a National Championship. Harper was also part of two Maryland teams that advanced to the Elite Eight, a 2007 Naismith Award Finalist and a two-time Naismith Award Preseason Candidate. As a senior, Harper was a Third Team All-ACC honoree and Associated Press Honorable Mention All-American. Harper still owns the Maryland record with 198 blocked shots while scoring 1,407 points and ranked seventh in rebounds upon graduation before being named to the 2014 ACC Legends Class.

On February 5, 2009, Harper's No. 15 jersey was raised to the rafters at the Xfinity Center following a game against North Carolina State.

Also, a presence on the international scene, Harper was a starter for the 2004 USA Women's U18 team which won the gold medal at the FIBA Americas Championship. Harper also played for the 2007 FIBA U21 World Championship Team and was a teammate of Lisa Leslie, Diana Taurasi and other Olympians at the 2008 Good Luck Beijing Tournament.

Following her collegiate career, Harper was the 10th overall selection of the Sacramento Monarchs in the 2008 WNBA Draft. As a rookie, Harper played in 34 games while making one start and put up 5.5 points and 4.0 rebounds before starting in 11 games the following season. Harper also played professionally overseas in Turkey, Italy and Russia.

Posted by Councilman George L. Cook III at 7:17 AM