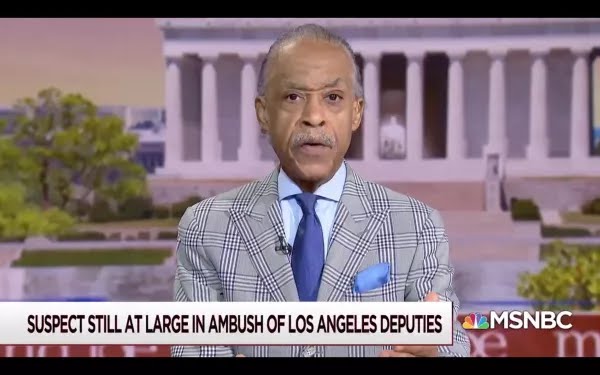 Civil rights activist, Al Sharpton said on MSNBC that he prays for the LA County police officers shot in Compton in the same prayer as he does Jacob Blake and George Floyd. He also asked that ALL senseless violence whether it’s committed by police or civilians stop.

"I think that the protesters that have been, for months, out there now, I among them, should be saying we are not anti-police and we are certainly not for killing or shooting police," said Al Sharpton on MSNBC's Morning Joe. "We are there saying that police should not be wrongfully killing or shooting civilians, particularly in the Black community. And for people to try to associate us with murder and ambushing and death is doing more to hurt the cause than anything else. Some, I suspect in my own way of thinking, could be planted in order to hurt us because that is so extreme from our position."

"Let me be real clear, I pray for the lives of those two officers just like I pray for Jacob Blake who was shot in the back seven times in Kenosha, Wisconsin and I pray for the family of George Floyd," Sharpton added. "And I pray for all of them in the same prayer. I don't have separate prayers for police victims and for police that are victimized. The same prayer: that we stop this senseless violence and this senseless lawlessness. This is where we must be. This is Dr. King's tradition. This is what Nietzsche wrote about. John Lewis. Anyone on the other side whether they claim that they're left or right are wrong, that's what they are."