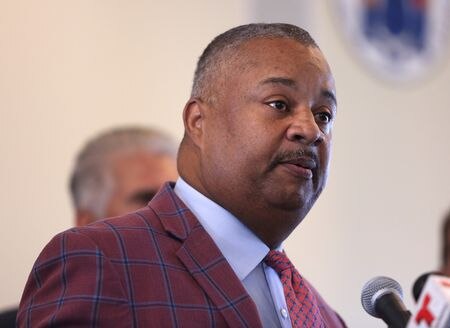 Today, Congressman Donald M. Payne, Jr. voted to impeach President Trump for “incitement of insurrection” after his actions encouraged a mob riot that damaged the U.S. Capitol Building, killed five people, injured dozens of police officers, and forced several members of Congress and staff to move to secure locations. The move comes one day after Rep. Payne, Jr. voted for a separate House resolution to ask Vice President Mike Pence and the Cabinet to invoke the 25th Amendment to remove Trump from office and allow the Vice President to assume the president’s responsibilities until Joe Biden is sworn in January 20, 2021 as the new president.

“This president will go down in history as the worst one America has ever had,” said Congressman Donald M. Payne, Jr. “Since his election, he has shown a reckless disregard for the safety and security of the American people through his coronavirus response and his support for an insurrection against our country. President Trump’s urging of rioters and domestic terrorists to siege our Capitol Building, a symbol of democracy worldwide, shows he must be removed from office immediately. Once he is removed, we can work to restore America as one nation again with liberty and justice for all.”

The resolution (H.Res. 24) would impeach President Trump for high crimes and misdemeanors based on conduct that violates his duty to preserve, protect and defend the Constitution. Specifically, it focuses on Trump’s actions to encourage the riot on January 6, 2021 on Capitol Hill. Trump told supporters before the riot to travel to Washington, D.C. so they could attack the Capitol Building, threaten Republican and Democratic elected officials, and try to stop the certification of votes from the November election. Normally, certification is a routine procedure that Republicans mand Democrats support.

In addition, the resolution mentions Trump’s phone call to Georgia Secretary of State Brad Raffensperger to overturn Georgia’s presidential election. In the January 2, 2021 call, Trump threatened Raffensperger with possible criminal consequences if he did not falsify an extra 11,780 votes and declare Trump the winner of Georgia’s Presidential election. The resolution states that “President Trump gravely endangered the security of the United States and its institutions of Government. He threatened the integrity of the democratic system, interfered with the peaceful transition of power, and imperiled a coequal branch of Government. He thereby betrayed his trust as President, to the manifest injury of the people of the United States.”