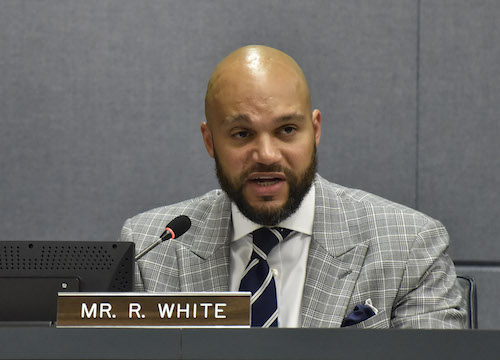 In a letter sent Thursday, D.C. Councilmember Robert White (D-At Large) asked District of Columbia Attorney General Karl Racine to assess whether Trump could be prosecuted for inciting a riot.

Under existing D.C. law, it’s illegal for anyone to “willfully [incite or urge] other persons to engage in a riot,” which the law defines as a gathering of five or more people who, through their actions, create “grave danger of damage or injury to property or persons.”

In his letter, White says that Trump could well have violated this law when he rallied supporters on the Ellipse just ahead of the chaos at the Capitol that left five people dead and suspended the counting of electoral votes for seven hours.

“[Trump] asserted that the presidential election was rigged and corrupt, and supporters heeded the President’s call to go to the Capitol and ‘fight like hell,'” wrote White, himself an attorney. “The resulting violent attack was deliberate and predictable.”

Anyone convicted of inciting a riot can be sentenced to six months in jail and a $1,000 fine. The law also specifies that if during a riot “a person suffers serious bodily harm or there is property damage in excess of $5,000,” the possible consequences get significantly more severe: 10 years in prison and a $25,000 fine.

“In response to the terrorist attacks on the Capitol, I took time to think through vulnerabilities going forward, and it quickly occurred to me that not only had the president incited a riot, but that he’s likely to continue doing this after he’s out of office,” White said in an interview. “So I wanted to make sure we have the ability to hold the president accountable both for the terrorist attacks he incited this week and for any time he may do this after he leaves office.”

A spokesman for Racine said his office was “reviewing the letter,” but had no immediate comment on whether prosecuting Trump for inciting a riot would be possible. Earlier today, though, he said on “Good Morning America” that investigations could happen.