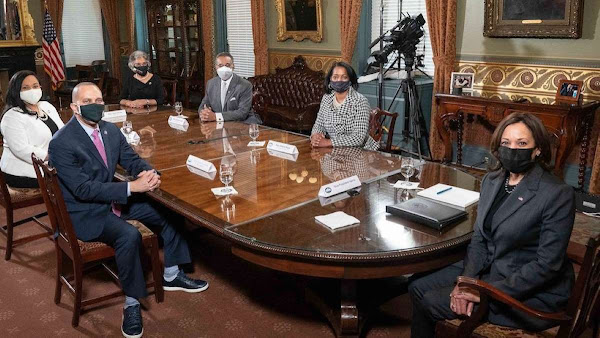 Vice President Harris held her first meeting with members of the Congressional Black Caucus (CBC) in her ceremonial office this week.

The caucus tweeted a photo of Harris, an alum of the caucus, seated at a table in the office on Wednesday with Rep. Joyce Beatty (D-Ohio), chair of the caucus, along with Reps. Jahana Hayes (D-Conn.), Hakeem Jeffries (D-N.Y.), Emanuel Cleaver (D-Mo.) and Nikema Williams (D-Ga.).

The caucus, which was founded in 1971, has 58 members in the current Congress, a record high for the group.

The group is celebrating its 50th anniversary this year and recently unveiled an "100 Day Plan" that details the some of its legislative priorities for the first few months of Biden presidency.

Those priorities include the creation of an internal domestic policy leadership team that Beatty spearhead with other members, as well as passing legislation like the George Floyd Justice in Policing Act and the John Lewis Voting Rights Advancement Act.

Posted by Councilman George L. Cook III at 7:21 AM