House panel approves bill to set up commission on reparations 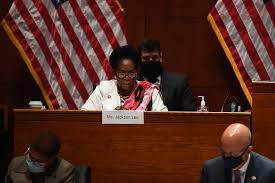 Legislation that would create a federal exploratory commission on reparations for Black Americans was approved Wednesday by a House committee for the first time, setting up a vote by the full Congress if Democratic leaders choose to bring it to the House floor.

Spearheaded by Rep. Sheila Jackson Lee (D-Texas), who took up H.R. 40’s cause after the late Rep. John Conyers (D-Mich.) retired from Congress in 2017, the bill passed through the House Judiciary Committee along party lines.

The committee held a hearing on H.R. 40 back in February, which featured multiple reparative justice experts. The idea of reparations, while not new, has gained steam in recent years, and the legislation currently has 176 co-sponsors in the House, its most ever.

House Majority Leader Steny Hoyer (D-Md.) did not commit to bringing the bill to the floor, saying he was waiting to see what the Judiciary Committee would do. In the meantime, he called on President Biden to form his own reparations panel from the White House — a process that would not force any centrist Democrats to take what might prove a difficult vote.

Posted by Councilman George L. Cook III at 5:11 AM