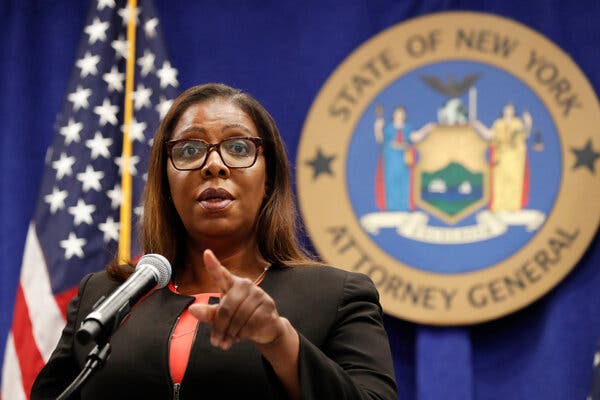 New York Attorney General Letitia James today announced legislation to change New York state's laws governing police violence to strengthen prosecutors’ ability to hold police officers accountable for unjustified and excessive use of force. The Police Accountability Act — the most far-reaching use of force reform in the nation — seeks to amend New York’s law that justifies police use of force, which currently sets an exceedingly high standard for prosecuting police officers who have improperly used deadly or excessive force. The centerpiece of the legislation seeks to amend the use of force law from one of simple necessity to one of absolute last resort, mandating that police officers only use force after all other alternatives have been exhausted. The legislation will also establish new criminal penalties for police officers who employ force that is grossly in excess of what is warranted in an interaction with civilians.

“For far too long, police officers in this country have been able to evade accountability for the unjustified use of excessive and lethal force,” said Attorney General James. “In New York, our laws have essentially given police blanket defense to use force in interactions with the public, making it exceedingly difficult for prosecutors to go after officers who have abused this power. Not only is that gravely unjust, but it has also proven to be incredibly dangerous. The Police Accountability Act will make critical and necessary changes to the law, providing clear and legitimate standards for when the use of force is acceptable and enacting real consequences for when an officer crosses that line. While this is an important step in addressing the shortfalls of our criminal justice system, it is not a cure all for the ills that have impacted too many families and claimed too many lives. We must continue to do everything in our power to protect our communities and ensure that no one is beyond the reach of justice.”

Overview of the Police Accountability Act

The Police Accountability Act (S.6615) includes a series of reforms aimed at improving protocols and strengthening accountability measures when police officers use force, especially lethal force. These legislative reforms are intended to reduce deaths at the hands of police by ensuring that police officers adhere to practices and tactics that aim to preserve life and only use lethal force as a last resort, while providing prosecutors with appropriate tools to potentially hold officers accountable when an individual dies after an interaction with police.

1) Use of Force Must Be A Last Resort

Current law: New York’s current law does not require officers to exhaust other options, such as de-escalation, verbal warnings, or lower level uses of force, before using force, including lethal force.

Police Accountability Act reform: The Police Accountability Act seeks to amend this law by establishing a “last resort” standard, whereby use of force must be a last resort that officers can only employ when there are no reasonable alternatives to avoiding force or reducing the force used. Officers must instead exhaust alternatives, including de-escalation, lower levels of force, verbal warnings, and other methods.

Current law: New York’s current use of force law authorizes police to use lethal force based simply on an officer’s reasonable belief that an individual committed a particular crime — a certain category of felony or attempt to commit a felony — and irrespective of whether the individual presents a danger to the officer or another person at the time.

Current law: New York’s current law justifying police use of force does not provide a mechanism for prosecutors to consider an officer’s own responsibility for creating the need for force in the first place.

The Police Accountability Act — sponsored by State Senator Kevin Parker in the Senate and to be sponsored by Assemblymember N. Nick Perry in the Assembly — seeks to establish criminal penalties for police officers who employ force that is grossly in excess of what is warranted under the circumstances and where that force causes physical injury or death. The level of charge would depend on the severity of the injuries caused.

“Our legal system makes it far too difficult to achieve fairness where police violence is concerned,” said Senate Deputy Leader Michael Gianaris. “This legislative proposal will provide the tools necessary to hold wrongdoers accountable and move us closer to justice. I thank Attorney General James for her efforts on this important issue and look forward to working with her to get it done.”

“Currently, the ‘excessive use of force’ is a term of poetry in the state of New York. This important legislation corrects that and defines it in the law,” said State Senator Kevin Parker. “This creates a reasonable expectation for law enforcement as well as the people of our great state. Thank you to the attorney general for your leadership on this important issue.”

“The use of excessive force by police officers has not only taken loved ones and family members, but is also a continuous scourge for our communities,” said State Senator Jamaal Bailey. “The Police Accountability Act will make it clearly understood that the state of New York will not tolerate individuals in law enforcement who deviate from the mission of protecting and serving and instead attempt to incorrectly take justice into their own hands. To minimize the occurrences of unjustified uses of force, accountability and consequences are necessary. Establishing explicit standards and expectations for officers, coupled with criminal penalties, will create a system where justice is equitable and responsibility can be had. Techniques such as de-escalation are proven to work and should be emphasized as being necessary and commonly used tools, and in many occurrences can be substituted for the use of force. The Police Accountability Act is a landmark set of reforms that will work to answer the shortcomings in our current criminal justice system and work to protect many communities. I would like to thank New York Attorney General Letitia James for her dedication and continuous work of ensuring that justice is fair and even-handed for all New Yorkers.”

“Today, we answer the call of the people of New York state who have spoken up loudly and clearly,” said Assemblymember Nick Perry. “I am proud to sponsor the Police Accountability Act in the New York Assembly to reform police use of force laws in New York state. I do so on behalf of all those men and women who were taken from their families and loved ones far too soon because police used unjustified and excessive force. The shoot first mentality must end, whether you are wearing a badge or not. This act will save lives, and make the use of deadly force, an absolute last resort.”

“Misconduct and abuse of power has become culturally engrained within our police forces, and we must work together to bring it to an end,” said Assemblymember Catalina Cruz. “The unjustified and excessive use of force, as well as the lack of accountability, are destroying the relationship between the police and the communities they have been tasked to serve. These critical initiatives will begin to change that. I want to thank the attorney general for her bold and forward-facing leadership, and I am proud to stand in support and as an ally in the fight to strengthen and protect our communities.”

“There is no question that our criminal justice system is in need of drastic reform,” said Gwen Carr, mother of Eric Garner. “For far too long, police officers have gotten away with putting people’s lives in danger without facing consequence of any kind. Not only is that unjust, but it’s deeply painful for those of us who have lost family members to police violence. I commend Attorney General James for taking this bold and necessary action to reform New York’s laws and ensure that we have more tools available to hold officers accountable who use unnecessary deadly force.”

Posted by Councilman George L. Cook III at 8:12 AM