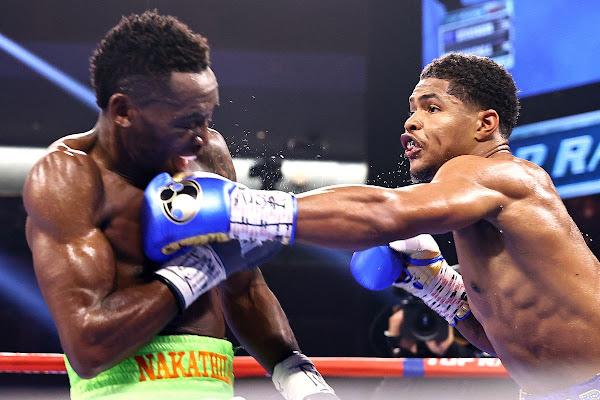 Newark New Jersey's Shakur Stevenson (16-0, 8 KOs) dominated every round of his fight with Jeremiah Nakathila , cruising to a shutout unanimous decision victory to claim the WBO interim junior lightweight title.

All three judges scored the bout 120-107 in favor of Stevenson, who registered a knockdown of Nakathila (21-2, 17 KOs) in the fourth round from a short right hook.

Stevenson outlanded Nakathila 114 to 28 in total punches. Stevenson also landed 46% of punches, as compared to Nakathila's 12%. Stevenson appeared to hurt Nakathila several times in the early rounds but failed to finish him.

Stevenson is already looking ahead to his title opportunity, which should come in his next fight. He's the No.1 contender for both the WBO and WBC junior lightweight belts, and he has been the mandatory challenger for the WBO title for several months now.

Stevenson's promoter, Top Rank has paperwork already drawn up for Stevenson to return to the ring in late fall or early winter 2021 against a fellow southpaw in WBO junior lightweight champion Jamel Herring for his title.

Posted by Councilman George L. Cook III at 7:16 AM