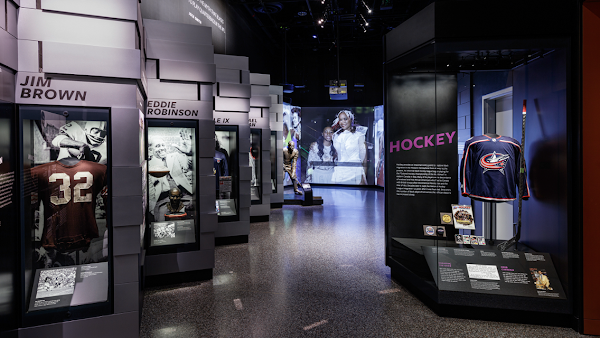 The Smithsonian's National Museum of African American History and Culture (NMAAHC) has installed a new exhibition case dedicated to hockey. On view in the "Sports: Leveling the Playing Field" gallery, the exhibition explores hockey's early history and Black athletes' contributions, which extend to the late 19th century. Alongside the hockey case is a new statue honoring the first Black player in the National Hockey League (NHL), Willie O'Ree.

The Colored Hockey League (CHL) was founded in 1895 by descendants of African Americans that escaped slavery and fled north. Among that group were roughly 30,000 formerly enslaved African Americans that sailed to Canada after fighting alongside British troops during the American Revolution and the War of 1812. As the museum explores the widespread legacies of slavery, hockey provides an entry point to explore the experiences of African Americans who sought a life better than the one they had in the United States. Years later, their descendants created a hockey league that helped develop the modern game.

"The skill, creativity and athletic abilities of these players were unmatched and defied the belief that Black athletes were incapable of playing such a sport," said Damion Thomas, NMAAHC's curator of sports. "Their story is one of resilience and determination, mirroring that of their ancestors who migrated north to escape slavery. These athletes invested in a pastime that brought a sense of comradery and community to Black Canadians and immigrants in Canada."

Although the league was active for a brief time (1895-1930), the legacy of these Black hockey players and the all-Black league is evident today through the rising number of Black players in the NHL, most of whom hold roots from throughout the African diaspora, including Jamaica, Haiti, Canada, the United States and Nigeria. However, even after the first Black player joined the game in 1958, the presence of Black hockey players in the NHL has been slow to increase, reaching a record high of 28 players in the 2017-18 season.

"This story of hockey-the full story-acknowledges Black athletes' crucial role in shaping hockey as we know it today and tells a more inclusive history of not just hockey but the enduring legacy of slavery," Thomas said.

Several objects from the museum's collection are on view showcasing the history of the Black hockey league in Nova Scotia, Canada, known as the CHL, in which players pioneered various innovations like butterfly goaltending, a technique goaltenders use to block attempts to score. Also included are objects from Ice Hockey in Harlem and the Fort Dupont Ice Hockey Club, two hockey programs that use the sport to encourage diversity and personal development in African American youths. In addition, objects from outstanding African American NHL players like Seth Jones and Joel Ward are on display.