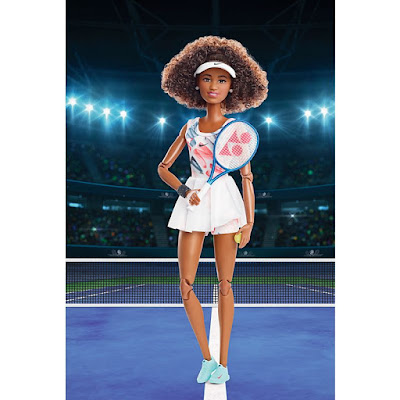 In 2019, she was a Barbie® Shero, honored with a doll in her likeness. Now, in 2021, we're thrilled to honor tennis player Naomi Osaka with a Barbie® Role Models Doll that's available for collectors and tennis fans around the world!

Osaka represents Japan as a professional tennis player. She became the first Japanese player in history to win a Grand Slam (one of the four major annual tennis tournaments) at the U.S. Open in 2018. The following year, she won another Grand Slam tournament (the Australian Open) and reached #1 in the Women’s Tennis Association (WTA) rankings. She already won her fourth career Grand Slam title earlier in 2021, and she's using her platform to speak out about issues surrounding human rights and racial injustice. Naomi is a force, on and off the court!

To make the Naomi Osaka Doll a reality, Barbie® Signature turned to designer Carlyle Nuera. He's well-known for the research he puts into his subjects, and when asked for his thoughts about her, he says, "Obviously Naomi’s athletic skill is unmatched, that's a fact. But what I personally admire the most about Naomi Osaka is how she uses her platform, the spotlight on her and her voice, to raise awareness about social justice."

The Naomi Osaka Barbie® Doll wears a Nike tennis dress with brushstroke print, inspired by a look she sported at a major match in 2020. With a white Nike visor, light blue athletic shoes, and a replica of her Yonex tennis racket, she’s ready to hit the court.

The doll body Carlyle chose for the Naomi Osaka doll is the Made to Move™ original doll body, which features 22 total points of articulation, for endless posing possibilities. The included display stand will help you set up some great action shots for your social posts, too.

The Barbie® Role Models Naomi Osaka Barbie® Doll is part of our Black Label® series of dolls, available for $29.99 in the online shop. When she debuts, there will be a limit of two (2) dolls per person, so as many Naomi Osaka and Barbie® fans as possible can add her to their collections. (This limit is subject to change at a later date.)

This doll also represents the Roles Models who play a part in our ongoing Barbie Dream Gap Project. It's a global initiative designed to introduce girls to women’s stories from all walks of life, because imagining they can be anything is just the beginning. Actually seeing that they can makes all the difference!

With displayable packaging and so many true-to-life details, this collectible doll makes a great gift for tennis fans of any age. Get your Naomi Osaka Barbie® Doll in the shop today!

Posted by Councilman George L. Cook III at 11:22 AM