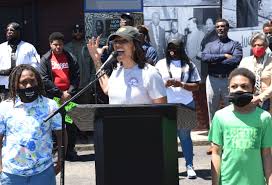 The Detroit City Council voted unanimously to pass a resolution that would place a question regarding reparations for African Americans on voter ballots.

On Tuesday, the resolution passed unanimously, which is only one step forward. Now language must be approved by the Detroit Election Commission.

"I know one thing, that it's not a handout, you know, it is a hand up," Sheffield said. "It is something that Black Detroit is owed ... we're going to start to study and research what are other cities doing, what fits best in Detroit. But I think it's about creating economic upward mobility for Detroiters, generational wealth, homeownership, things that, you know, historically we've been left out of."

"The measure, which was unanimously supported by City Council, will help move the conversation from talk to action and towards making amends for the most egregious discriminatory and racist practices of the past," Sheffield said of the passage passing. "Ultimately, this is about repairing the damage done to the African American community and leveling the playing field so the aggrieved have an equal and real opportunity for success and a better quality of life."