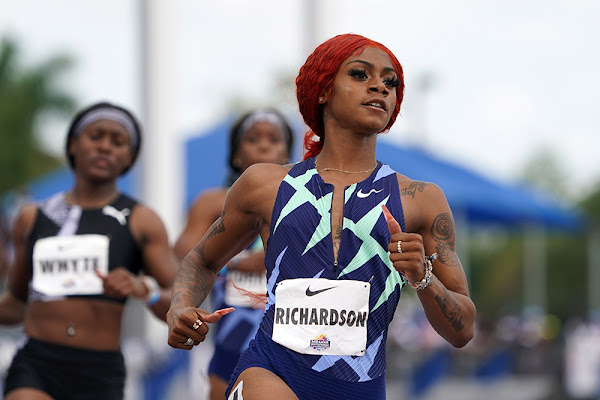 Sha’Carri Richardson leads off the stars lining up for the Prefontaine Classic, and in a rare treat fans can enjoy her electrifying flair twice.

Her competitors will be the fastest available, as meet organizers aim to load fields with Tokyo medalists as the Pre Classic kicks off the post-Olympic sequence of Wanda Diamond League meets. In Richardson’s case, that’s two events as she intends to race both the 100 and 200 meters, an unusual one-day double in Diamond League competition.

Even at age 21, this generational talent already has a history of doing both.

Just three weeks ago, the Dallas native sizzled the surface of reimagined Hayward Field at the University of Oregon with a blistering 10.64 in the 100-meter semifinals at the U.S. Olympic Trials. Even though the race was wind-aided, she noticeably eased up to a time that only Florence Griffith Joyner and Shelly-Ann Fraser-Pryce have ever surpassed under any conditions.

Later that same day Richardson won the final easily, her nails and brightly-colored flowing hair making a fashion statement to match her speed.

Richardson rose to stardom in her home state of Texas when as an LSU freshman she stormed to a collegiate record 10.75 to win the 2019 NCAA Championships in Austin. Later that day she fell just 0.01 seconds short of winning the 200.

Doubling in Pre Classic sprints has been historically rare, even before the Diamond League began in 2010. The last man or woman to win both the 100 and 200 in the same year was Maurice Greene in 1999, two years after Inger Miller came closest in women’s events in 1997 with a first in the 100 and second in the 200.

Additional entries in both the 100 and 200 meters will be announced in the coming weeks.

Tickets for the 46th annual edition of the Prefontaine Classic, to be held August 20-21 at Hayward Field in Eugene, Ore., will be available at 9 a.m. Pacific Time on Monday, July 12 at GoDucks.com. Purchase gains entry into both Friday night and Saturday sessions of the meet. All seats are reserved for both sessions.

Accreditation requests for bona fide members of the media wishing to cover the Prefontaine Classic can be placed online at portal.diamondleague.com. Media accreditation questions and other inquiries can be sent to media@preclassic.com.

The Prefontaine Classic is the longest-running outdoor invitational track & field meet in America and is part of the elite Wanda Diamond League of meets held worldwide annually. The Pre Classic’s results score has rated No. 1 or No. 2 in the world 8 of the last nine years it has been contested.

The meet has been sponsored by NIKE continuously since 1984, the longest running title sponsorship of a single sports event in the United States.

The NIKE Prefontaine Classic will be shown live to an international audience by NBC on Saturday.

Steve Prefontaine is a legend in the sport of track & field and is the most inspirational distance runner in American history. He set a national high school 2-mile record (8:41.5) while at Marshfield High School in Coos Bay, Oregon, that is the fastest ever in a National Federation-sanctioned race. While competing for the University of Oregon, he won national cross country championships (3) and outdoor track 3-Mile/5000-meter championships (4), and never lost a collegiate track race at any distance. As a collegiate junior, he made the 1972 U.S. Olympic Team and nearly won an Olympic medal, finishing 4th in the 5K at the 1972 Munich Olympics, at age 21.  After finishing college in 1973 and preparing for a return to the Olympics in 1976, he continued to improve, setting many American records. His life ended tragically on May 30, 1975, the result of an auto accident, at age 24. The Pre Classic began that year and had been held every year since, until 2020 when it fell victim to the pandemic. Now a new string begins.

Posted by Councilman George L. Cook III at 10:29 AM