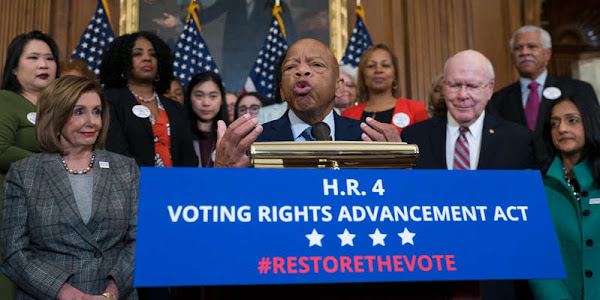 The House approved the John R. Lewis Voting Rights Advancement Act on Tuesday in a party-line vote, kicking the legislation to the Senate — where it faces longer odds of passage.

The bill was approved 219-212, with zero Republicans voting for it.

“Nothing is more fundamental to our democracy than the right to vote.” Rep. Terri Sewell (D-Ala.), a main sponsor of the bill, said from the floor during debate on the legislation.

“It was in my district that ordinary Americans peacefully protested for the equal right to vote for all Americans,” Sewell noted, referring to the struggle of the late Lewis and other civil rights activists on the Edmund Pettus Bridge 56 years ago.

The bill approved Tuesday centers around restoring the federal preclearance originally instituted by the 1965 Voting Rights Act, which was eroded by a 2013 Supreme Court decision.

The preclearance required states and jurisdictions with histories of racial discrimination — largely the Jim Crow South — to gain approval from the Department of Justice before implementing any change to voting procedure.