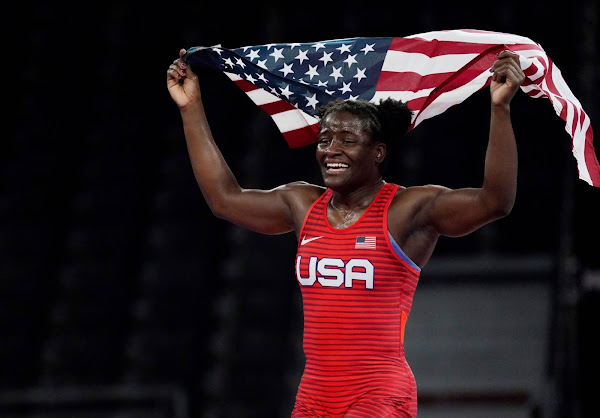 As Tamyra Mensah-Stock celebrated winning her Olympic gold medal, she hoped her victory would encourage Black girls in the United States to consider wrestling.

When she defeated Nigeria’s Blessing Oborududu 4-1 in the women’s 68-kilogram freestyle wrestling final on Tuesday, she became the first American Black woman to win Olympic gold in wrestling and the second American woman overall.

“These young women are going to see themselves in a number of ways and they’re going to look up there and go, I can do that,” she said. “I can see myself.”

Mensah-Stock, the No. 1 seed, blitzed through a formidable field. She defeated Japan's Sara Dosho — a 2016 Olympic gold medalist — 10-0 in the first round.

She beat China’s Feng Zhao 10-0 in the quarterfinals, then beat Ukraine’s Alla Cherkasova — a former world champion — 10-4 in the semifinal.

She finished the dominant run by defeating Oborududu, the No. 2 seed and a three-time Olympian, in the final.

“Well, you’ve got to beat the best to know that you’re the best,” Mensah-Stock said. “And that’s what I keep telling myself. It doesn’t matter the draw. You go out there and you beat whoever is in front of you because that’s how you tell somebody that you were the best. I’m the bad draw.”