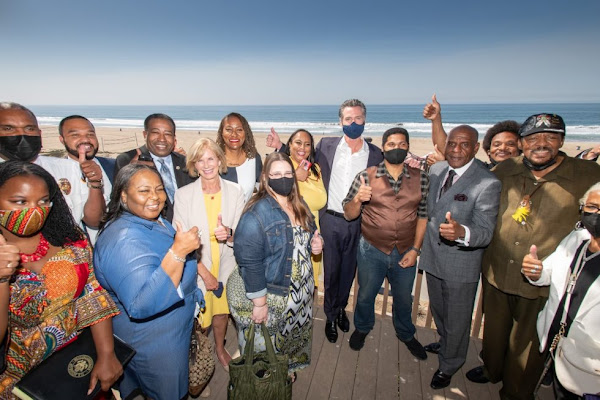 Nearly a century after Bruce’s Beach was wrongfully taken from Black entrepreneurs Willa and Charles Bruce, Governor Gavin Newsom signed legislation that will enable Los Angeles County to return the beachfront property to their descendants, continuing the state’s leadership to redress historical injustices and advance equity.

The Governor signed SB 796 by Senator Steven Bradford (D-Gardena) today at Bruce’s Beach, alongside Bruce family members, legislators and local leaders. The urgency measure, sponsored by the Los Angeles County Board of Supervisors, authorizes the county to immediately begin the process of transferring parcels of the Manhattan Beach property to the Bruce family.

“As we move to remedy this nearly century-old injustice, California takes another step furthering our commitment to making the California Dream a reality for communities that were shamefully shut out by a history of racist exclusion,” said Governor Newsom. “We know our work is just beginning to make amends for our past, and California will not shy from confronting the structural racism and bias that people of color face to this day. I thank the Bruce family, Senator Bradford, the Los Angeles County Supervisors and all those who fought to keep the legacy of this place alive and deliver this long overdue justice.”

The Bruces purchased the property in 1912 and established a popular resort serving Black residents that was a fixture in the community. The Bruces endured years of racist harassment and violence, and Manhattan Beach city officials ultimately seized their property through eminent domain in 1924. Earlier this year, the Los Angeles County Board of Supervisors voted unanimously to move forward with a land transfer to the Bruce family in motions co-authored by Supervisor Janice Hahn and Supervisor Holly Mitchell.

“SB 796 shows us that it is never too late to address the injustices of the past,” said Senator Bradford. “If you can inherit generational wealth in this country, then you can inherit generational debt too. The City of Manhattan Beach, County of Los Angeles, and the State of California owe a debt to the Bruce family. This bill passed the Legislature unanimously and with overwhelming community support, making it clear that our state is committed to tackling systemic racism head-on. As a member of the California Reparations Task Force, this is an example of what real reparations can look like. I applaud Governor Newsom for helping us pay a century’s old debt by allowing Los Angeles County to move forward and return Bruce’s Beach to its rightful owners— the Bruce family.”

“This is a milestone for us, and I want to thank, not only Governor Newsom for signing this bill into law, but Senator Bradford for his leadership and the entire state legislature for their unanimous support,” said Supervisor Hahn. “The work is far from done. Now that LA County officially has the authority to transfer this property, my goal these next several months will be to transfer this property in a way that not only works for the Bruce family, but is a model that other local governments can follow. Returning Bruce’s Beach can and should set a precedent for this nation and I know that all eyes will be on Los Angeles County as this work gets underway.”

Posted by Councilman George L. Cook III at 6:29 AM