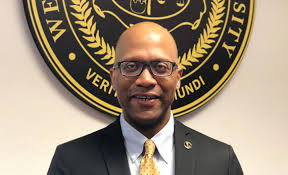 INSTITUTE, W.Va. – The West Virginia State University (WVSU) Board of Governors voted to name Ericke S. Cage as the interim president of the university.

Cage’s appointment must still be approved by the West Virginia Higher Education Policy Commission (HEPC). He will serve as interim president until a new permanent president for the university is selected.

“I am both honored and humbled by the trust the West Virginia State University Board of Governors has placed in me to serve as interim president of this great institution,” said Cage. “Since my arrival here I have strived to do what is right for the students, faculty and staff of the university and that will continue in my new role. We have tremendous momentum at West Virginia State and I look forward to all we will accomplish working together in the months ahead.”

While at Norfolk State, Cage led the university’s 2019-2025 strategic plan committee and served as principal staff lead for the university’s 2019-2020 self-assessment. He also supported the advancement of good board governance by redesigning new board member training, overseeing the development and execution of the annual board retreats, and developing a board member skills matrix for the university’s Board of Visitors. Cage was also instrumental in expanding Norfolk State’s presence and impact on Capitol Hill and before the Virginia General Assembly.

Prior to joining Norfolk State, Cage served as director of government affairs for Teach for America, and also served as legislative counsel for U.S. Congressman Tom Perriello, in addition to serving as a law clerk for the U.S. Department of Defense, and a legislative fellow for the U.S. Department of Veterans’ Affairs. He also served as a congressional fellow in the office of U.S. Congressman Keith Ellison. Cage began his career as a high school government teacher in his hometown of Halifax County, Virginia.

Posted by Councilman George L. Cook III at 7:04 AM