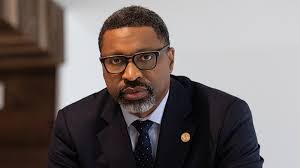 "Today was another punch in the gut for America. The failure to pass the Freedom to Vote Act is reprehensible. Combined with the John Lewis Voting Rights Act, this bill would have been a necessary step in the right direction for our democracy. But while our democracy dwindles on the edge of a cliff, lawmakers are still finding a way to put partisanship above the country.

There is no such thing as bipartisanship when one half of a legislative body does not respect the Constitution which they swore an oath to protect. Don't forget that Black voters landed a victory for this President and this Congress, so don't fail us again. The White House and Congress must work together to find a path forward before the 11th hour runs out."

Posted by Councilman George L. Cook III at 7:26 AM