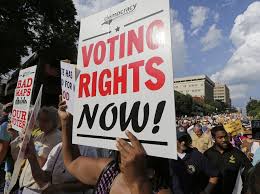 Senate Republicans have blocked -- for the second time this year -- a Democratic measure aimed at enacting sweeping federal election law changes, a move that is certain to increase pressure on the majority to change the chamber's filibuster rule.

Every Senate Republican opposed the vote to start debate on the voting rights bill.

The vote on Wednesday was to start debate on the measure, a move that required 10 Republicans to vote with all Democrats. But no Republicans supported the revised bill.

Sen. Angus King, D-Maine, a lead sponsor of the legislation and member of that working group, pleaded with colleagues to support the bill, saying U.S. democracy is "fragile" and at stake in the wake of Trump's false claims about the 2020 election despite no widespread fraud found in multiple, nonpartisan investigations.

King told reporters on a conference call that the only option after the vote Wednesday is to alter the Senate's filibuster rule that requires 60 votes to pass most legislation but also imposes no requirement on the 41 senators who are in opposition other than his or her stated opposition to legislation that is up for a vote.

Posted by Councilman George L. Cook III at 6:30 AM