WHO Director-General Bestows Posthumous Award on the Late Henrietta Lacks 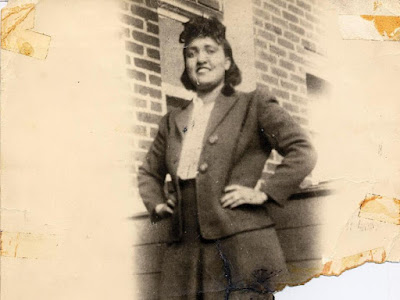 Dr Tedros Adhanom Ghebreyesus honored the late Henrietta Lacks with a WHO Director-General’s award, recognizing the world-changing legacy of this Black American woman who died of cervical cancer, 70 years ago, on 4 October, 1951.

While she sought treatment, researchers took biopsies from Mrs Lacks’ body without her knowledge or consent.  Her cells became the first “immortal” cell line, and have allowed for incalculable scientific breakthroughs such as the human papillomavirus (HPV) vaccine, the polio vaccine, drugs for HIV and cancers, and most recently, critical COVID-19 research.

Shockingly, the global scientific community once hid Henrietta Lacks’ race and her real story, a historic wrong that today’s recognition seeks to heal.

“In honouring Henrietta Lacks, WHO acknowledges the importance of reckoning with past scientific injustices, and advancing racial equity in health and science,” said Dr Tedros. “It’s also an opportunity to recognize women - particularly women of colour - who have made incredible but often unseen contributions to medical science.”

The award was received at the WHO office in Geneva by Lawrence Lacks, Mrs. Lacks’ 87-year-old son.  He is one of the last living relatives who personally knew her.  Mr. Lacks was accompanied by several of Henrietta Lacks’ grandchildren, great-grand children, and other family members.

“We are moved to receive this historic recognition of my mother, Henrietta Lacks – honouring who she was as a remarkable woman and the lasting impact of her HeLa cells. My mother’s contributions, once hidden, are now being rightfully honored for their global impact,” said Lawrence Lacks, Sr., Henrietta Lacks’ eldest son. “My mother was a pioneer in life, giving back to her community, helping others live a better life and caring for others. In death she continues to help the world. Her legacy lives on in us and we thank you for saying her name – Henrietta Lacks.”

An Iconic Story of Inequity, Injustice and Disparities in Health with Contemporary Relevance

Today, women of colour continue to be disproportionately affected by cervical cancer, and the COVID-19 pandemic has exposed the many faultlines where health inequities persist among marginalized communities around the world. Studies in various countries consistently document that Black women are dying of cervical cancer at several times the rate of white women, while 19 of the 20 countries with the highest cervical cancer burdens are in Africa.

The family’s discussions with WHO especially focused on the Organization’s ambitious campaign to eliminate cervical cancer. The past year, which marked the 100th anniversary of Henrietta Lacks’ birth, coincides with the inaugural year of WHO’s Global strategy to accelerate the elimination of cervical cancer.  This historic campaign marks the first time ever that all WHO Member States have collectively resolved to eliminate a cancer.

The family also joins WHO in advocating for equity in access to the HPV vaccine, which protects against a range of cancers, including cervical cancer.  Despite having been prequalified by WHO over 12 years ago, supply constraints and high prices still prevent adequate doses from reaching girls in low-and-middle income countries.

“It is unacceptable that access to the lifesaving HPV vaccine can be shaped by your race, ethnicity or where you happen to be born,” said Dr Princess Nothemba (Nono) Simelela, Assistant Director-General for Strategic Priorities and Special Advisor to the Director General. “The HPV vaccine was developed using Henrietta Lacks’ cells.  Although the cells were taken without her consent and without her knowledge, she has left behind a legacy that could potentially save millions of lives. We owe it to her and her family to achieve equitable access to this groundbreaking vaccine.”

As a young mother, Henrietta Lacks and her husband were raising five children near Baltimore when she fell ill.  She went to Johns Hopkins after experiencing extensive vaginal bleeding and was diagnosed with cervical cancer.  Despite treatment, it cut her life short on October 4, 1951.  She was only 31 years old.

During treatment, researchers took samples of her tumour.  That “HeLa” cell line became a scientific breakthrough: the first immortal line of human cells to divide indefinitely in a laboratory.  The cells were mass produced, for profit, without recognition to her family. Over 50,000,000 metric tonnes of HeLa cells have been distributed around the world, the subjects of over 75,000 studies.

In addition to the HPV vaccine, HeLa cells allowed for development of the polio vaccine; drugs for HIV/AIDS, haemophilia, leukaemia, and Parkinson’s disease; breakthroughs in reproductive health, including in vitro fertilization; research on chromosomal conditions, cancer, gene mapping, and precision medicine; and are used in studies responding to the COVID-19 pandemic.

Following the presentation of the award, the family and WHO will proceed to the shores of Lake Geneva, to watch the city’s iconic Jet d’Eau illuminate in the colour teal – the colour for cervical cancer awareness – in honour of Henrietta Lacks’ legacy and in appreciation of the family’s support for the global campaign to eliminate the disease.  It is the first of several world monuments that will illuminate in teal between now and November 17th, marking the first anniversary of the launch of the global elimination campaign.

Quotes from other participants

“Through HELA100: The Henrietta Lacks Initiative, my family stands in solidarity with WHO and our sisters around the world to ensure that no other wife, mother or sister dies needlessly from cervical cancer,” said Victoria Baptiste, Henrietta Lacks’ great granddaughter. “As a registered nurse, I am proud to also be here today to honour my great grandmother’s legacy by advocating to ensure equitable access to the breakthroughs that her HeLa cells advanced such as the HPV vaccine. It is only fitting that as we commemorate the 70th anniversary of Henrietta Lacks’ HeLa cells and her untimely passing, we build upon her legacy by ensuring equitable access to advances in cancer prevention and treatment for all people.”

“Though her life was cut short, Henrietta Lacks’ contributions to medicine have led to remarkable scientific breakthroughs, saving countless lives and bringing us closer to eliminating cervical cancer,” said Dr Senait Fisseha, Co-Chair of the Director-General’s expert advisory group on cervical cancer elimination. “Her story is also a clear example of how Black women have long been overlooked in healthcare and still are today. I applaud the WHO for recognizing her, a vital step in acknowledging the incredible impact she’s had on science and honouring her legacy in advancing health justice for people around the world.”

“The fight to eliminate cervical cancer is part of the larger fight for human rights,” said Dr Groesbeck Parham, who participated in the civil rights movement as a teenager in Birmingham, Alabama, and is now Clinical Expert for WHO’s cervical cancer elimination initiative and Co-Chair of the Director-General’s expert advisory group. “Through her immortal cells, Mrs. Henrietta Lacks speaks to us, also calling our attention to the millions of young women and mothers in low-income countries who still continue to die from cervical cancer because they cannot access and afford to purchase the life-saving medicines, technologies and medical procedures that are readily available in high-income countries. The questions being raised by the spirit and legacy of Mrs. Henrietta Lacks are: ‘why does this situation exist’, ‘what are the solutions’, and ‘when are you going to implement them.’”