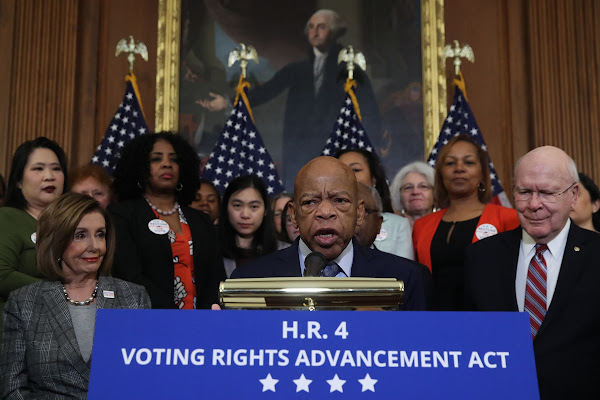 Senate Majority Leader Charles Schumer (D-N.Y.) said on Monday that he will force a vote this week on a voting rights bill named after the late Rep. John Lewis (D-Ga.)

Schumer will force a vote on Wednesday on whether to debate the bill. It is expected to fail to get the 60 votes needed to advance.

"I will file cloture on the motion to proceed to the John Lewis Voting Rights Advancement Act, setting up a vote to take place on Wednesday," Schumer said from the Senate floor.

"If there's anything that merits debate here in the Senate, it's protecting the precious right of Americans to participate in our elections," Schumer added.

The voting rights bill named after Lewis would update the Voting Rights Act (VRA) to strengthen sections of the 1965 law that were gutted by the Supreme Court's 2013 Shelby County v. Holder decision, which focused on Section 5 of the VRA that required Justice Department preclearance before some states could change voting laws, and the 2021 Brnovich v. Democratic National Committee decision, which advocates believe weakened Section 2 of the 1965 law focused on racially targeted voting policies.

"I am prepared to offer a full-fledged debate befitting this great chamber. Republicans will be given the chance to raise their objections, to offer amendments and make changes to the bill," Schumer said.

"I know that both parties have serious disagreements on this important issue, so we want to hear from the other side what they propose. But for that to happen, we need to start debate first. We need to vote to allow the Senate to work through its process," Schumer added.