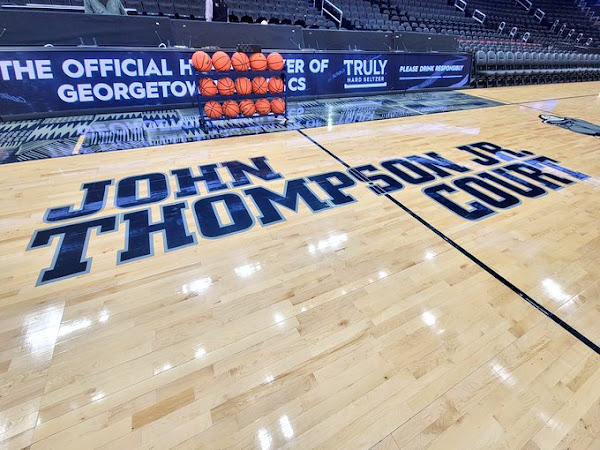 The university announced the naming of the court at Capital One Arena on Saturday in honor of the legendary leader and former coach who died last year at age 78.

Members of Thompson's family, as well as former Georgetown stars like Alonzo Mourning and Dikembe Mutombo, sat courtside to watch the program honor the Hoyas legend.

Thompson's biggest star at Georgetown, Patrick Ewing, is now entering his fifth season as head coach at his alma mater.

Known for coaching with a white towel on his right shoulder, Thompson was hired in 1972 after the Hoyas had just completed a three-win season. In 1984, he became the first Black head coach to lead a team to the national title.

While winning was important to Thompson, he never shied away from speaking his mind and standing up for social justice issues. On Saturday, the program was also awarded the first John Thompson Jr. Award—an honor given to a school that strives to fight prejudice and discrimination and advance positive societal change—by the Big East.

"Coach Thompson's impact on this program, this athletic department and this university will last forever," Georgetown athletic director Lee Reed said. "Knowing what he stood for, knowing the importance of the work he did in his lifetime, it's our responsibility collectively to not only uphold that but to continue to move that forward."