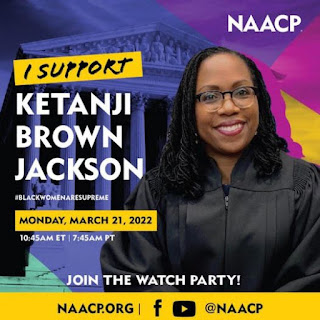 A Black woman nominated for the Supreme Court of the United States is history in the making and long overdue. Let's celebrate, support, and prepare for a more inclusive Court.

Join the NAACP as they mark this historic appointment at their watch party for her Senate hearing on Monday, March 21 at 10:45 AM ET. You can watch at NAACP.ORG or at the  NAACP | Facebook Page.

We will be joined by powerful influencers and public figures as well as viewers from all 50 states. Hear from scholars, leaders, and organizers throughout our community as we share the joy and significance of this nomination together. Join us for this watch party moderated by Aisha Mills, Host of AMplified on BNC, and featuring the following commentators: