Sen. Cory Booker Statement on Signing of Emmett Till Antilynching Act into Law 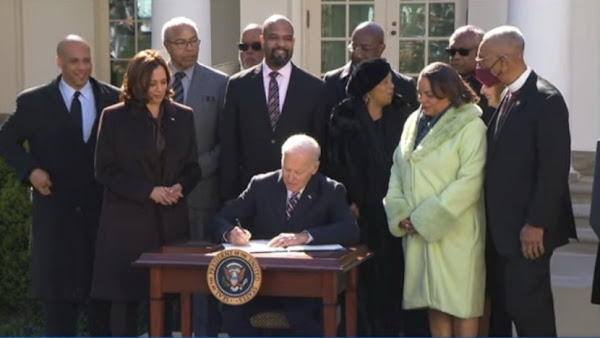 “As our nation strives to become a more perfect union, we must reckon with America’s past, including the history of racialized violence that has permeated our nation. Antilynching legislation will not heal the pain experienced by the more than 4,000 African American men, women, and children who were lynched during the 19th and 20th centuries. It will not reverse the fear and suffering that Black communities endured during those years as this shameful instrument of terror was wielded by white supremacists to intimidate and oppress. But signing the Emmett Till Antilynching Act into law is a necessary step that signals our nation is willing to confront the darkness of its past to move towards a brighter future.

“This day is more than just the result of the bipartisan efforts undertaken in the past weeks, months, and years; instead, it is the culmination of an endeavor that has spanned generations. The first of 200 attempts to make lynching a federal crime occurred in 1900. In 2018, I was proud to continue the fight alongside then-Senator Kamala Harris and have worked with colleagues on both sides of the aisle to make sure this bill passes Congress. Now, with the President’s signature, we are finally able to say that, after a century’s worth of efforts, we have met the moment and done the right thing.”

Posted by Councilman George L. Cook III at 6:43 AM