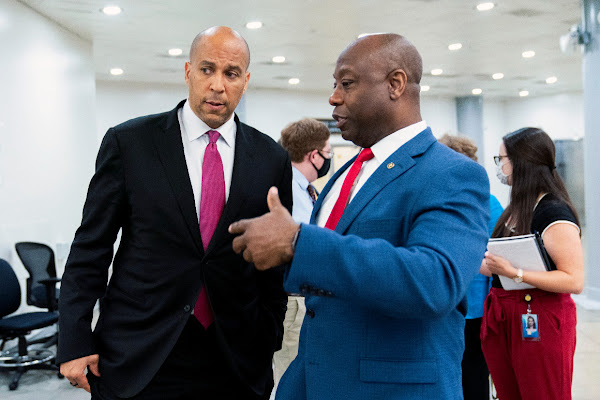 Named after Emmett Till, a 14-year old boy who was brutally lynched in 1955, the Emmett Till Anti-Lynching Act would amend the United States Code to specify that lynching is a crime that warrants an enhanced sentence under existing federal hate crime statues. Companion legislation was introduced in the House by Rep. Bobby Rush (D-IL-1) and is expected to pass the chamber today.

“Between 1936 and 1938, the national headquarters of the NAACP hung a flag with the words ‘A man was lynched yesterday’, a solemn reminder of the reality Black Americans experienced daily during some of the darkest chapters of America’s history,” said Sen. Booker. “Used by white supremacists to oppress and subjugate Black communities, lynching is a form of racialized violence that has permeated much of our nation’s past and must now be reckoned with. To that end, I am proud to introduce this legislation to help us acknowledge the pain caused by lynchings and make the shameful practice a federal crime. Although this bill will not undo the terror and fear of the past, it’s a necessary step that our nation must take to move forward.”

"While we cannot erase our nation's past, we can work toward a better future for all Americans," said Sen. Scott. "The Emmett Till Anti-lynching Act will do just that. This long-overdue piece of legislation sends a clear message: We will not tolerate hatred and violence against our fellow Americans."

“It's important that our nation affirm its commitment to rejecting lawlessness, violence and bigotry,” said Bryan Stevenson, founder and Executive Director of the Equal Justice Initiative. “It's as important today as it was decades ago which makes the bill timely and urgent.”

The efforts to pass anti-lynching legislation date back to 1918 when Congressman Leonidas C. Dyer (R-MO) became the first member of Congress to introduce a bill on the issue. His bill, intended to punish authorities who failed to prevent lynching, ultimately died in the Senate after facing stiff opposition. After 200 failed attempts by Congress to pass anti-lynching legislation, Congress is now prepared to criminalize lynching as an instrument of terror and intimidation used against more than 4,000 African-African men, women, and children during the late 19th and 20th centuries, according to data from the Equal Justice Initiative.

In 2019, Booker, Scott, and then-Senator Kamala Harris (D-CA) led unanimous passage of an earlier version of the legislation on the Senate floor. That motion passed, marking a historic step towards the first federal anti-lynching law in the United States.

In 2005, 90 members of the U.S. Senate passed a bipartisan resolution apologizing to the victims of lynching for the repeated failure of the Senate to enact anti-lynching legislation. These senators expressed their deepest sympathies and most solemn regrets of the Senate to the descendants of victims of lynching, the ancestors of whom were deprived of life, human dignity, and the constitutional protections accorded all citizens of the United States.