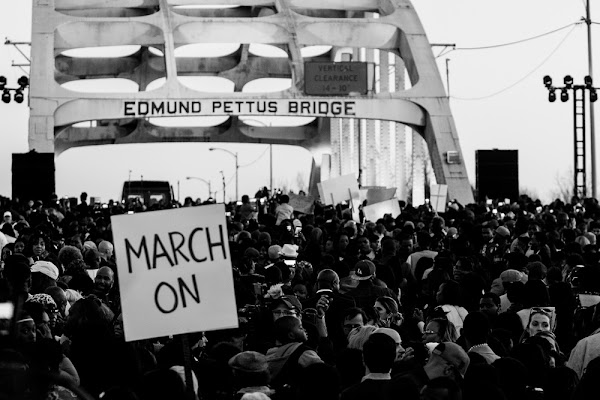 The Alabama Senate voted 23-3 for legislation that would change the official name of Selma's Edmund Pettus Bridge, but not to a name many wanted or to one that many would expect. While I somewhat understand the explanation given I don't like the proposed name change.

From the Associated Press:

Alabama lawmakers on Tuesday advanced legislation that would alter the name of Selma's Edmund Pettus Bridge to honor those who were beaten on the bridge as they marched for civil rights in 1965.

The Alabama Senate voted 23-3 for legislation that would change the official name to the “Edmund W. Pettus-Foot Soldiers Bridge.” However, the lettering on the famous bridge would remain unaltered. The name “Foot Soldiers” would be on a separate sign that would include a silhouette of the marchers.

The bill, dubbed the “Healing History Act,” now moves to the Alabama House of Representatives with three meeting days remaining in the legislative session.

“Not a single letter would be touched. It would stay intact in its historical context. And at the same time... honor the history that is there and the history that came out of it,” said state Sen. Malika Sanders-Fortier, a Democrat from Selma.

Through the years some have proposed changing the name of the bridge, including a push to name it for the late U.S. Rep. John Lewis. The Georgia congressman was one of the demonstrators beaten on the bridge in 1965.

Sanders-Fortier said many who marched for civil rights in her community do not want the bridge name changed entirely because of what the bridge has come to represent.

Sanders-Fortier said it is important to honor all of the state's history and “to heal from our past so we can move forward as a state.”

“Many of the events in our state’s history have been traumatizing, been traumatizing to African-American folk to Indigenous folk to white folk," she said, adding that healing means considering the "hurt of each group.”