Booker T. Washington was first African American to appear on a U.S. stamp 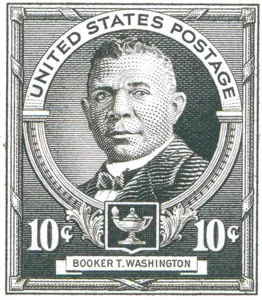 Hi this is George Cook of African American Reports. I have recently started collecting stamps featuring African Americans, and that lead me to see who the first African American on U.S. postsge stamp. I quickly researched and learned that person would be Booker T. Washington.

If interested in buying the stamp, it can be purchased here: https://amzn.to/3jl3BYG

On April 7, 1940, the Post Office Department (POD) issued a stamp honoring African-American educator Booker T. Washington (1856-1915) as part of its Famous Americans Series. The nation's first stamp to honor an African-American, it holds a unique place in American history. Social, economic, and legislative struggles since 1940 have produced deeper understanding and acceptance among racial groups. Today, the United States Postal Service (USPS) regularly honors African-Americans and their widely varied contributions to the nation and the world.

Born a slave in Hale's Ford, Virginia, Washington served as a role model for other struggling African-Americans, and, as founder of Alabama's Tuskegee Normal Industrial School (renamed Tuskegee Institute in 1937), he profoundly influenced the community's self-esteem and self-reliance. In 1938, President Franklin D. Roosevelt, responding to numerous petitions from African-American supporters, recognized the timeliness of such a stamp and directed that Washington be considered for this important stamp series.

Major Robert Richard Wright, Sr., among others, had aggressively lobbied for a stamp honoring Booker T. Washington since Roosevelt took office in 1933. When Wright read the POD's decision to feature Washington on the 10¢ stamp, announced in 1939, he reflected with gratification, [the stamp] "comes pretty nearly within the limit of seventy-five years of Negro Emancipation.”¹ He objected, however, to its high denomination, preferring to see it as one of the lower-priced, more affordable denominations used by the public daily. He worried that the cost of the 10¢ stamp "will not induce a large first day sale . . . among colored people.”² Echoing Wright's concerns, The Washington Tribune recommended that its readers buy the stamp for special delivery and parcel post mailings. "Let's overlook no chance to use these new stamps which honor our eminent educator,” urged the newspaper's editor in a special issue released on March 23, 1940.

Numerous institutions, all important in the lives of African-Americans, clamored to host the stamp's first day of issue ceremony. The POD selected Tuskegee Institute, founded by Washington in 1881, for this watershed ceremony's location. Guests gathered in the Institute Chapel. Postmaster General James A. Farley attended the ceremony and afterwards, joined by the Tuskegee Club of Montgomery, Alabama, placed a wreath at Washington's tomb. George W. Peterson, an African-American Civil Service employee attached to the POD's Division of Stamps, attended and helped Tuskegee's postmaster, R. H. Harris, prepare the first day covers. Also an African-American, Harris attracted recognition in The Washington Tribune (March 23, 1940) as "one of the few colored postmasters in the United States.” All told, twenty-five extra clerks assisted Harris in preparing the first day covers.

Enthusiasm for the Booker T. Washington stamp and its momentous significance for the African-American population prompted two official second day of issue ceremonies, events unprecedented in philatelic history—one in New York City and the other in Philadelphia. Unable to attend the ceremony at Tuskegee, Major Robert Richard Wright, Sr., attended Philadelphia's ceremony, where he purchased a batch of 1,000 stamps. The press focused attention not only on Washington but also on Major Wright, a prominent African-American man in his own right. Wright, like Washington, had been born a slave. He had carved-out a distinctive niche within the community as an educator and administrator, through military service during the Spanish-American War, and as a banker.

Tuskegee Institute owns the first sheet of Booker T. Washington stamps sold, but it passed through several hands before reaching its final destination. Captain Alvin J. Neely, Tuskegee General Alumni Association's executive secretary, purchased the sheet, autographed by James A. Farley. Neely presented the sheet to Washington's daughter, Portia Washington Pittman, who then gave it to Dr. William J. Schieffelin, Tuskegee's chairman of the board, for preservation. Adding to the memorable event, the Tuskegee Philatelic Club issued covers with a hand-stamped cachet showing a likeness of Washington's graveside monument.

If interested in buying the stamp, it can be purchased here: https://amzn.to/3jl3BYG