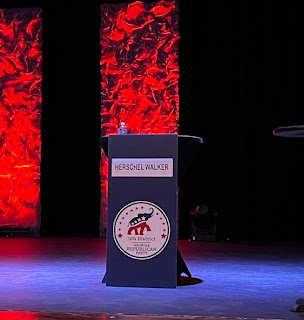 The first major debate for the Republican U.S. Senate race in Georgia was held on Saturday. Herschel Walker was a no-show.

Each of Walker’s top rivals criticized the GOP frontrunner for skipping the event and predicted that his strategy, which involves a regimen of mostly tightly scripted events and private gatherings, would leave him vulnerable against Democratic U.S. Sen. Raphael Warnock.

Since entering the race last year with Trump’s support, Walker has ignored his rivals and bypassed many large GOP gatherings, even if it meant alienating key activists and officials. He’s also indicated he won’t participate in debates until the general election.

In this instance, Walker cited the Horatio Alger Award ceremony in Washington as a scheduling conflict. The event ended Saturday morning, hours before the evening debate.

Walker has held wide leads in public polls, including an Emerson College/The Hill poll that pegged him near 60%. His opponents contend they have an opening to force him into a runoff, noting earlier polls had Walker hovering around 80%.