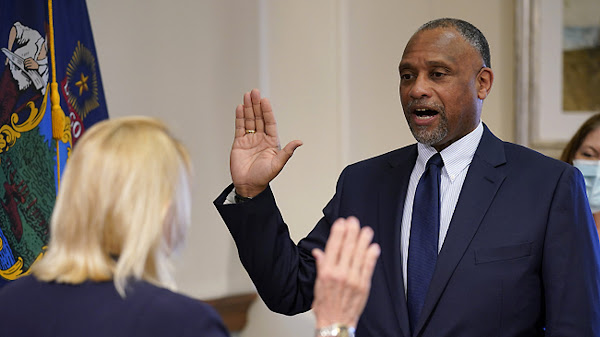 Gov. Janet Mills swore in Judge Rick Lawrence on Tuesday as the newest member of the Maine Supreme Judicial Court in a historic first for the state’s high court.

Lawrence is the first Black justice on Maine's highest court and comes to the job after 22 years on the District Court bench in Androscoggin, Oxford and Franklin counties. He served as deputy chief judge for the district courts in Maine and also as the presiding judge in Androscoggin County’s Unified Criminal Docket’s Domestic Violence Judicial Monitoring Program. Speaking during the swearing-in, Mills said Lawrence’s decades of experience presiding over family court as well as civil and criminal matters will be an asset to the court.

“Bringing that direct, recent and immediate experience of dealing with the nitty gritty of people’s lives is extraordinarily important for the life of the court, to the discussions that they will have behind closed doors, to the conversations about what is happening in real life,” said Mills, a former prosecutor and attorney general.

After taking the oath, Lawrence said he had a stack of legal briefs waiting for his review as part of his new position. But the Portland resident also marked the historic nature of his appointment, which came roughly 22 years after he became Maine’s first-ever Black judge.

"And before I do conclude today what I want to do is express my profound respect and my debt of gratitude for the generations of African Americans who preceded me and did the heavy lifting to make this historic day possible,” Lawrence said.

A Massachusetts native, Lawrence graduated from Yale University and Harvard Law School before working for years as an attorney in Portland in the corporate and regulatory sectors, including as vice president and managing counsel at UNUM Provident Life Insurance Company. He was nominated to the District Court in 2000 by then-governor and now U.S. Sen. Angus King. He will replace Associate Justice Ellen Gorman, who just retired from the court.

Posted by Councilman George L. Cook III at 6:22 AM