After 12 terms in Congress, Corrine Brown defeated in primary 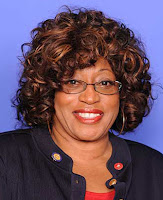 Al Lawson, a former state senator from Tallahassee, won 48 percent of the vote to defeat Brown, who drew 39 percent of the vote in the Democratic primary for a district that now stretches from Downtown Jacksonville west along the Florida-Georgia border to Leon County.

Brown said she was proud that she had severed her constituents well during her 24 years in Congress, and 10 years before that in the Florida House of Representatives.

"It's been an honor serving the people, and they're going to have a new representative," Brown said. "I don't feel bad tonight because I know I've done the best I could."

Not only did Brown run in a district drawn to cover thousands of voters she had never represented, but she was indicted in July on 22 federal charges that include conspiracy, mail and wire fraud and violation of tax laws.

Brown and her chief of staff, Ronnie Simmons, are accused of using an unregistered charity to raise $800,000 that prosecutors said they used as a personal "slush fund."

Brown's trial on the federal corruption charges was delayed until at least November after a third set of attorneys withdrew from the case last week.

Immediately after her concession speech, Brown began dancing with her bodyguard to, "My Girl." Her supporters joined in and continued to applaud her -- the end of an era in Jacksonville and seemingly a nod to her accomplishments.

Posted by Councilman George L. Cook III at 5:24 AM No comments: