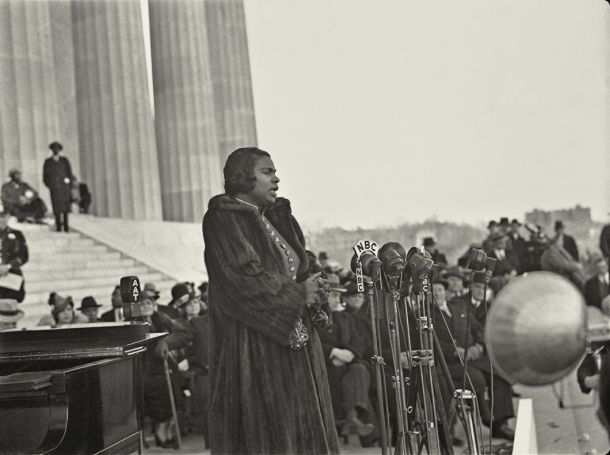 American Masters and Philip Gittelman Productions, in association with Black Public Media, have begun production on a new documentary on contralto Marian Anderson (1897-1993) for PBS. Directed by Emmy- and Peabody Award-winner Rita Coburn, American Masters – Marian Anderson: The Whole World in Her Hands (w.t.) will explore the life, career, art and legacy of the singer of classical music and spirituals. Best known for her performance at the legendary Freedom Concert on April 9, 1939, Anderson, in a bold protest against racial intolerance, sang before a diverse crowd on the steps of the Lincoln Memorial in Washington, D.C., after being denied use of Constitution Hall by the Daughters of the American Revolution. In that moment, Anderson — despite being a fiercely private person — transformed into a symbol for the nascent civil rights movement, even inspiring a 10-year-old Martin Luther King, Jr., who listened on the radio.

With unprecedented access to the Marian Anderson Estate, the documentary will draw on rare archival footage and audio recordings and Anderson’s extensive personal correspondence to family and friends, including Martin Luther King, Jr., W.E.B. DuBois, Duke Ellington, Shirley Chisholm and Langston Hughes, to reveal the woman behind the icon. Anchored by key performances in her career, American Masters – Marian Anderson: The Whole World in Her Hands (w.t.) will show how her quiet genius and breathtaking voice set the stage for black performers in classical music, and a louder voice for civil rights.

“When producing films about people who experienced racism and the Civil Rights movement, having a filmmaker who understands the lens of the subject is a crucial part of telling the story successfully,” said Michael Kantor, executive producer of American Masters. “Rita co-directed our award-winning documentary Maya Angelou: And Still I Rise, and we’re thrilled to have her at the helm of this project.” “As an African American female director, I am honored to continue Marian Anderson’s legacy at a time when our culture needs to hear the tonality of resilience, power, beauty, voice and courage,” said director Rita Coburn. “When American Masters approached me with this opportunity, their support in curating a team of strength and talent from the black community was important to create a work that is empowered, inclusive and entrenched in the rigors of authentic storytelling. I look forward to working closely with director of photography Henry Adebonojo (Independent Lens: I Am Not Your Negro), composer Kathyrn Bostic (Clemency, American Masters – Toni Morrison: The Pieces I Am), and executive producer Brenda Robinson (United Skates, A Crime on the Bayou).”

The film, a recipient of a production grant from the National Endowment for the Humanities, will feature new interviews with Anderson’s friends, contemporaries and those she influenced, including fellow black opera singers, mezzo-soprano Denyce Graves and tenor George Shirley, who also serves on the film’s team of humanities advisers. Additional advisers with deep knowledge of Anderson, black history and music include Naomi André, Associate Professor in the Department of Afroamerican and African Studies, Women’s Studies, at the University of Michigan; Raymond Arsenault, author of “The Sound of Freedom: Marian Anderson, the Lincoln Memorial, and the Concert That Awakened America;” Christopher A. Brooks, Professor of Anthropology at Virginia Commonwealth University in Richmond, Virginia; Lucy Caplan, lecturer of History and Literature at Harvard University; and Allan Keiler, author “Marian Anderson: A Singer’s Journey.”

Affectionately known to audiences as “The Lady from Philadelphia” and “The People’s Princess,” Anderson’s career was propelled by her talent, but also steered by the limits imposed by racism and segregation. This gifted pioneer, whose strength was rooted in family and community, overcame humiliation, prejudice and financial hardship to become a voice for justice, an internationally renowned master of her craft and the first African American to sing a leading role at the Metropolitan Opera in 1955. Balancing her public triumph with her personal struggles and resilience, American Masters – Marian Anderson: The Whole World in Her Hands (w.t.) will chart the impact of one of the world’s greatest singers, whose career provides a window into a time of seismic cultural change

Posted by Councilman George L. Cook III at 4:53 AM No comments: