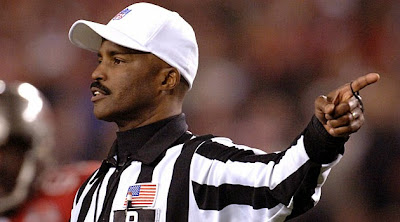 A former NFL referee told The Washington Post that he requested not to work home or away games for the Washington Redskins due to the team's controversial nickname.

Mike Carey, who retired after the 2013 season following 24 years in the league, says he requested off Washington's games beginning with the 2006 season because it became clear to him that "something disrespectful" was happening and being on the field "probably (was) not the best thing for me."

Longtime NFL referee Mike Carey said "even if I didn't have Native American friends, the name of the team is disrespectful." "In America we've learned that respect is the most important thing that you have. I learned it from my parents, my schools, from my faith. And when you learn there's something that might not be as respectful as you like, when you come to terms with it, you have to do something about it."

"I know that if a team had a derogatory name for African-Americans, I would help those who helped extinguish that name. I have quite a few friends who are Native Americans. And even if I didn't have Native American friends, the name of the team is disrespectful."